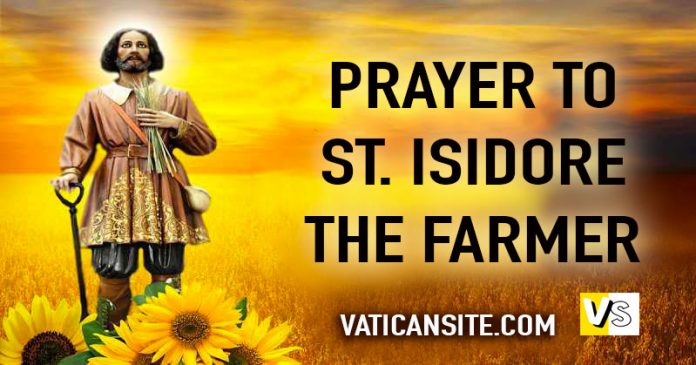 Patron of the National Rural Conference in the United States.

Dear St. Isidore we are told that your devotion to the Holy Sacrifice of the Mass was so great that you would rise before it was light in order to be able to attend Mass before beginning your work in the fields.

Obtain for us, we pray you, some of that loving devotion to the Holy Sacrifice of the Mass.

There it is that the fruits of our farm labor, bread and wine, are brought and offered to God by the priest.

Then, in the consecration, Christ Himself, Body and Blood, Soul and Divinity, becomes present on our altars under the appearances of this same bread and wine.

And in what was the altar bread, He comes to us to be the very food of our souls.

If we deeply realize the value and beauty of Holy Mass, we will be very happy to attend as often as we possibly can.

Help us to understand that in the Mass we offer ourselves to God with Christ by the hands of the priest. There we can bring to God all that we do, and offer it to Him in union with His Holy Sacrifice. The oftener we do this now, the happier we shall be hereafter. Good Saint Isidore, bless us and our labors, that we may some day reap the reward of good works with you in heaven.

St. Isidore the Farmer was a simple man of the earth, who attended the daily Catholic Latin Mass and demonstrated love of people and animals by his many acts of kindness and mercy. Isidore spent Sundays and holidays visiting the churches of Madrid and nearby towns.

He offered food to those poorer than himself, and often did not eat himself until they had finished.

Following his death, King Alphonsus of Castille had a vision of Isidore in the Pass of Navas de Tolosa during a battle with the Moors in 1211AD. In the vision, Isidore showed King Alphonsus an unknown pass that enabled his men to flank the Moors position and defeat them.

In 1947, he was proclaimed Patron of the National Rural Conference in the United States.

NOVENA TO OUR LADY HELP OF CHRISTIANShttps://t.co/xjpU7nCxrl

Prayer to my Guardian Angel