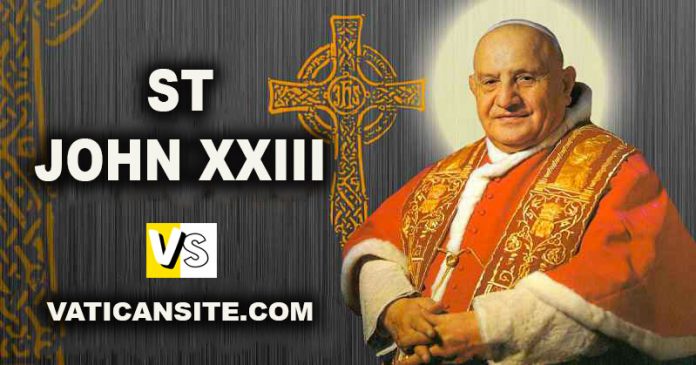 Every day I need you, Lord, but today especially,
I need some extra strength to face whatever is to come.

This day, more than any other day, I need to feel you near me to strengthen my Courage and to overcome any fear.

By myself I cannot meet the challenge of the hour.

We are frail human creatures and we need a Higher Power to sustain us in all that life may bring.

And so, dear Lord, hold my trembling hand.

Be with me, Lord, this day and stretch out your powerful arm to help me.

May your love be upon me as I place all my hope in you. Amen.

Reigned as Pope from 28 October 1958 to his death in 1963 and was canonized on 27 April 2014. Angelo Giuseppe Roncalli was the fourth of fourteen children born to a family of sharecroppers who lived in a village in Lombardy.

He was ordained to the priesthood on 10 August 1904 and served in a number of posts, including papal nuncio in France and a delegate to Bulgaria, Greece and Turkey.

In a consistory on 12 January 1953 Pope Pius XII made Roncalli a cardinal as the Cardinal-Priest of Santa Prisca in addition to naming him as the Patriarch of Venice.

Roncalli was elected pope on 28 October 1958 at age 76 after 11 ballots. His selection was unexpected, and Roncalli himself had come to Rome with a return train ticket to Venice.

He was the first pope to take the pontifical name of “John” upon election in more than 500 years, and his choice settled the complicated question of official numbering attached to this papal name that arose because of the existence in the Middle Ages of an antipope of using the name.

Pope John XXIII surprised those who expected him to be a caretaker pope by calling the historic Second Vatican Council (1962–1965), the first session opening on 11 October 1962. His passionate views on equality were summed up in his famous statement, “We were all made in God’s image, and thus, we are all Godly alike.”

John XXIII made many passionate speeches during his pontificate, one of which was on the day that he opened the Second Vatican Council in the middle of the night to the crowd gathered in St. Peter’s Square: “Dear children, returning home, you will find children: give your children a hug and say: This is a hug from the Pope!”

Pope John XXIII did not live to see the Vatican Council to completion. He died of stomach cancer on 3 June 1963, four and a half years after his election and two months after the completion of his final and famed encyclical, Pacem in terris.

He was buried in the Vatican grottoes beneath Saint Peter’s Basilica on 6 June 1963 and his cause for canonization was opened on 18 November 1965 by his successor, Pope Paul VI, who declared him a Servant of God.

In addition to being named Venerable on 20 December 1999, he was beatified on 3 September 2000 by Pope John Paul II alongside Pope Pius IX and three others. Following his beatification, his body was moved on 3 June 2001 from its original place to the altar of Saint Jerome where it could be seen by the faithful.

On 5 July 2013, Pope Francis – bypassing the traditionally required second miracle – declared John XXIII a saint, after unanimous agreement by a consistory, or meeting, of the College of Cardinals, based on the fact that he was considered to have lived a virtuous, model lifestyle, and because of the good for the Church which had come from his having opened the Second Vatican Council.

He was canonised alongside Pope Saint John Paul II on 27 April 2014. John XXIII today is affectionately known as the “Good Pope” and in Italian, “il Papa buono”.

The Roman Catholic Church celebrates his feast day not on the date of his death (3 June), as is usual, nor his birth, or even on the day of his papal coronation (as is the case with several canonised popes, such as John Paul II) but on 11 October – the day of the first session of the Second Vatican Council.

This is understandable, since the Council was his idea and it was he that had convened it. On Thursday, 11 September 2014, Pope Francis added his optional memorial to the worldwide General Roman Calendar of saints’ feast days, in response to global requests.

He is, however, commemorated on the date of his death, 3 June, by the Evangelical Lutheran Church in America and on the following day, 4 June, by the Anglican Church of Canada and the Episcopal Church (United States)

PRAYER TO THE MOST HOLY BODY OF CHRIST