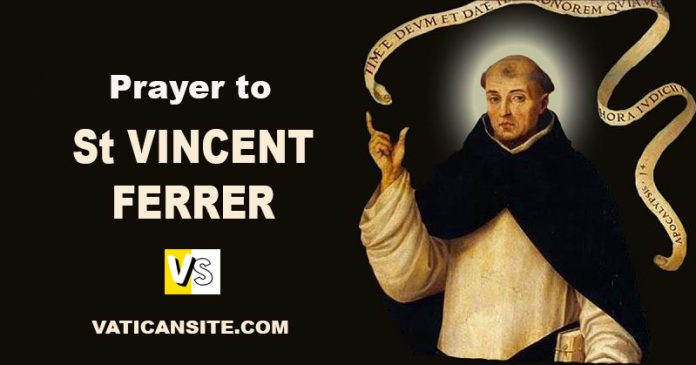 O St. Vincent Ferrer, glorious apostle, worker of miracles, and our loving patron, who in thy lifetime didst convert so many sinners by preaching the Last Judgment.

Grant that we too, by meditating upon the Four Last Things, Death, Judgment, Heaven and Hell may be enabled to obtain from Almighty God through thine intercession the healing of all our spiritual maladies.

Stretch forth thy hand over us, and obtain for us those graces for the welfare of both soul and body, which thou knowest we so earnestly need. We ask of thee to receive our humble prayer for.

And by thy mighty merits, intercede for us before the throne of Almighty God that by His grace and blessing we may ever labor for the recovery and restoration of our true Catholic Faith in doctrine, liturgy, morals, devotions, and spiritual practices, for the increase of Christ’s social and universal kingship and for the preparation of the glorious triumph of the Immaculate Heart of Mary.

Let us pray. O God, who didst vouchsafe to glorify Thy Church by the merits and preaching of Saint Vincent Ferrer, Thy Confessor: grant us Thy servants that we may be taught by his example, and be delivered by his patronage from all adversities.

Thou hast redeemed me, O God of truth.

At Valencia in Spain, this illustrious son of St. Dominic came into the world on January 23, 1357.

In the year 1374, he entered the Order of St. Dominic in a monastery near his native city. Soon after his profession he was commissioned to deliver lectures on philosophy.

On being sent to Barcelona, he continued his scholastic duties and at the same time devoted himself to preaching. At Lerida, the famous university city of Catalonia, he received his doctorate.

After this he labored six years in Valencia, during which time he perfected himself in the Christian life. In 1390, he was obliged to accompany Cardinal Pedro de Luna to France, but he soon returned home.

When, in 1394, de Luna himself had become Pope at Avignon he summoned St. Vincent and made him Master of the sacred palace. In this capacity St. Vincent made unsuccessful efforts to put an end to the great schism.

He refused all ecclesiastical dignities, even the cardinal’s hat, and only craved to be appointed apostolical missionary. Now began those labors that made him the famous missionary of the fourteenth century.

He evangelized nearly every province of Spain, and preached in France, Italy, Germany, Flanders, England, Scotland, and Ireland. Numerous conversions followed his preaching, which God Himself assisted by the gift of miracles.

Though the Church was then divided by the great schism, the saint was honorably received in the districts subject to the two claimants to the Papacy.

He was even invited to Mohammedan Granada, where he preached the gospel with much success. He lived to behold the end of the great schism and the election of Pope Martin V. Finally, crowned with labors, he died April 5, 1419

Prayer to the Good Shepherd