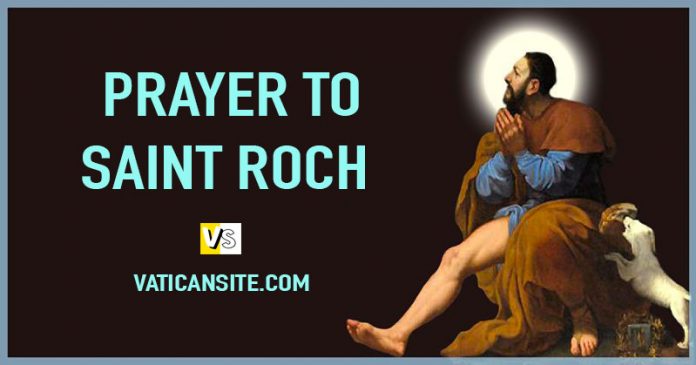 O Blessed San Roch,
Patron of the sick,
Have pity on those
Who lie upon a bed of suffering. Your power was so great

When you were in this world,
That by the sign of the Cross,
Many were healed of their diseases.

Now that you are in heaven, Your power is not less. Offer, then, to God
Our sighs and tears

And obtain for us that health we seek Through Christ our Lord. Amen.

San Roch, pray for us,
That we may be preserved
From all diseases of body and soul.

Untrustworthy sources say he was probably born at Montpellier, France, son of the governor there. He was orphaned when he was twenty.

He went on pilgrimage to and devoted himself to caring for the victims of a plague that was ravaging Italy. He became a victim himself at Piacenza but recovered and was reputed to have performed many miracles of healing.

On his return to Montpellier, he was imprisoned for five years as a spy in pilgrim’s disguise when his uncle, who was governor, ordered him imprisoned (His uncle failed to recognize him, and Roch failed to identify himself.)

Roch died in prison and was only then identified as the former governor’s son by a birthmark in the of a cross on his chest. Another biographer says that he was arrested as a spy at Angers, Lombardi, and died in prison there.

When miracles were reported at his intercession after his death, a popular cult developed and he is invoked against pestilence and plague. He is also the patron of invalids. He is known as Rocco inItaly and Roque in Spain. His is August 16th.

THREE DAYS OF PRAYER TO OUR LADY OF LOURDES