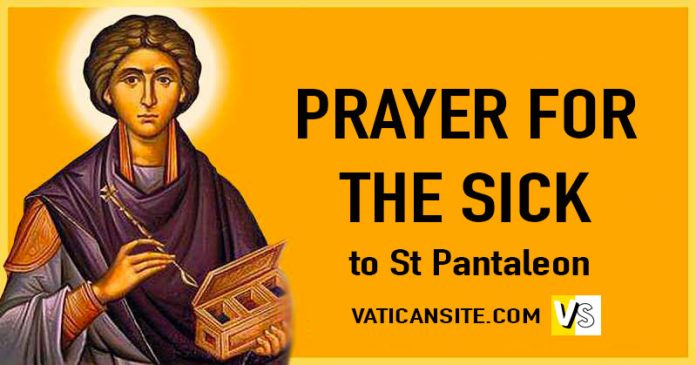 Almighty and eternal God! With lively faith and reverently worshiping Thy divine Majesty, I prostrate myself before Thee and invoke with filial trust Thy supreme bounty and mercy.

Illumine the darkness of my intellect with a ray of Thy heavenly light and inflame my heart with the fire of Thy divine love, that I may contemplate the great virtues and merits of the saint in whose honor I make this novena, and following his example imitate, like him, the life of Thy divine Son.

St. Pantaleon who during your life had great pity for the sick and with the help of God often relieved and cured them, I invoke your intercession with God, that I may obtain the grace to serve Him in good health by cheerfully fulfilling the duties of my state of life.

But if it be God’s Holy Will to allow me illness, pain, and suffering, aid me with your powerful prayer to submit humbly to His trials and crosses, to accept sickness in the spirit of penance, and to bear all patiently according to His Holy Will.

St. Pantaleon was physician to the Emperor Galerius Maximianus, and a Christian, but, deceived by often hearing the false maxims of the world applauded, was unhappily seduced into an apostasy.

But a zealous Christian called Hermolaus awakened his conscience to a sense of his guilt, and brought him again into the fold of the Church.

The penitent ardently wished to expiate his crime by martyrdom; and to prepare himself for the conflict, when Diocletian’s bloody persecution broke out at Nicomedia, in 303, he distributed all his possessions among the poor.

Not long after this action he was taken up, and in his house were also apprehended Hermolaus, Hermippus, and Hermocrates.

After suffering many torments, they were all condemned to lose their heads.

St. Pantaleon suffered the day after the rest. His relics were translated to Constantinople, and there kept with great honor.

The greatest part of them are now shown in the abbey of St. Denys near Paris, but his head is at Lyons.