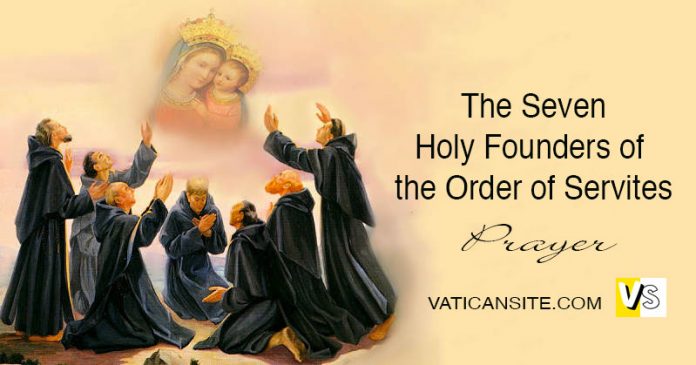 February 17: The Seven Holy Founders of the Order of Servites

The Seven Holy Founders of the Order of Servites -prayer

Ye glorious Patriarchs, heroes of the highest sanctity, whereby ye were made worthy to be chosen by the very Mother of God to spread devotion to her sorrows.

Forsaking the world, in the savage caverns of Monte Senario ye did crucify your flesh with unheard of penances, and did nourish your spirit with constant meditation on the highest truths of our holy faith.

In such wise did ye prepare yourselves for the mission entrusted to you and to your Order, namely, to root out vice and wickedness from the hearts of the faithful, by inspiring them with compassion toward the sorrows of the Blessed Virgin.

Thereafter, bearing deeply imprinted in your hearts the memory of the passion of the Son of God and of the sorrows of His blessed Mother, ye strove to quiet civil discord, to convert sinners to repentance, and to bring back to the obedience of the Roman Pontiff those that had gone astray.

Ah, from your thrones in glory, where ye now reign with Christ, turn your eyes in pity upon us who are still miserably struggling in this valley of trial and conflict! The devil, with all his wicked suggestions; the world, with all its seductions; the flesh, with all its lusts; all these, like roaring lions, surround us to devour us.

Let pity for us fill your hearts; infuse into our hearts at least a portion of your tender and constant compassion for the sorrows of Mary, so that, at the sight of our Mother overwhelmed in grief, we may be enabled to resist the fascinations of vice and may not renew, by our sins, the passion of our divine Redeemer, which was the cause of Mary’s sorrows.

Obtain for us, likewise, docility and promptness in answering the divine call, detachment from the seeming goods of this world, the spirit of mortification and penance, to the end that, having followed on earth your example in the way of holiness and perfection, we may deserve to be your companions in heaven and to sing with you the mercies of our crucified Redeemer and the glories of the Queen of Martyrs.

These seven saints all came from among the richest families in Florence, Italy. Each had a great love for Mary, the Mother of God. They were active members of a confraternity of the Blessed Virgin Mary popularly known as the ‘Laudesi’ or Praisers.

The eldest was Buonfiglio Monaldo, who became their leader. The others were Alexis Falconieri, Benedict dell’ Antella, Bartholomew Amidei, Ricovero Uguccione, Gerardino Sostegni, and John Buonagiunta. Their spiritual director was St. James of Poggibonsi, who was chaplain of the Laudesi, a man of great holiness and spiritual insight.

On the feast of the Assumption, while the seven men were deep in prayer, the Blessed Mother appeared to them. She inspired them to leave the world and to live alone with God.

After many years of living as hermits, they went to their bishop. They asked him for a rule of life to follow. The bishop encouraged them to pray and to ask for guidance from Mary.

Mary appeared to the men carrying a black habit. At her side was an angel bearing a scroll with the words “Servants of Mary” written on it. In this vision, the Blessed Mother said that she had chosen them to be her servants. She asked them to wear a black habit and to follow the Rule of St. Augustine.

These wonderful men helped each other love and serve God better. Six of them were ordained priests. The seventh founder, Alexis, remained a wonderful religious until death. In his humility, he chose not to be ordained to the priesthood.

Many young men came to join these holy founders. They were known as Servants of Mary or Servites.

PRAYER TO THE MOST HOLY BODY OF CHRIST