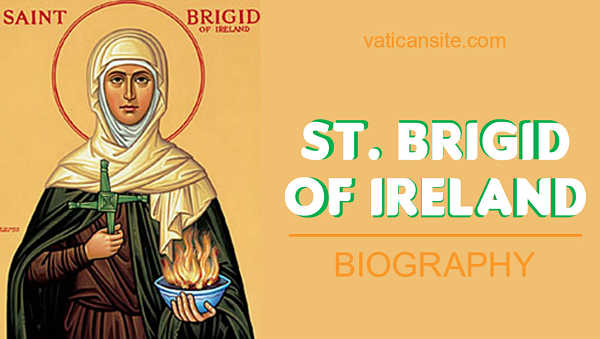 Saint Brigid of Ireland is one of Ireland’s patron saints, along with Saint Patrick and Saint Columba. Her feast day is celebrated on February 1.

There is much debate over her birthparents, but it is widely believed her mother was Brocca, a Christian baptized by Saint Patrick, and her father was Dubthach, a Leinster chieftain. Brocca was a slave, therefore Brigid was born into slavery.

When Dubthach’s wife discovered Brocca was pregnant, she was sold to a Druid landowner. It is not clear if Brocca was unable to produce milk or was not present to care for Brigid, but legend states Brigid vomited any food the druid attempted to feed her, as he was impure, so a white cow with red ears sustained her instead.

One story says Brigid once gave her mother’s entire store of butter, that was later replenished after Brigid prayed.

When she was about ten-years-old, Brigid was returned to her father’s home, as he was her legal master. Her charity did not end when she left her mother, and she donated his possessions to anyone who asked.

Eventually, Dubthach became tired of her charitably nature and took her to the king of Leinster, with the intention of selling her. As he spoke to the king, Brigid gave his jeweled sword to a beggar so he could barter it for food for his family. When the king, who was a Christian, saw this, he recognized her heart and convinced Dubthach to grant her freedom by saying, “Her merit before God is greater than ours.”

After being freed, Brigid returned to the Druid and her mother, who was in charge of the Druid’s dairy. Brigid took over and often gave away milk, but the dairy prospered despite the charitable practice, and the Druid eventually freed Brocca.

Brigid then returned to Dubthach, who had arranged for her to marry a bard. She refused and made a vow to always be chaste.

Legend has it St Brigid of Ireland prayed that her beauty be taken so no one would want to marry her, and the prayer was granted. It was not until after she made her final vows that her beauty was restored.

Another tale says that when Saint Patrick heard her final vows, he accidentally used the form for ordaining priests. When the error was brought to his attention, he simply replied, “So be it, my son, she is destined for great things.”

Little is known about Saint Brigid’s life after she entered the Church, but in 40 she founded a monastery in Kildare, called the Church of the Oak. It was built above a pagan shrine to the Celtic goddess Brigid, which was beneath a large oak tree.

Brigid and seven friends organized communal consecrated religious life for women in Ireland and she founded two monastic institutions, one for men and one for women. Brigid invited a hermit called Conleth to help her in Kildare as a spiritual pastor.

Her biographer reported that Brigid chose Saint Conleth “to govern the church along with herself.”

She later founded a school of art that included metalwork and illumination, which Conleth led as well. It was at this school that the Book of Kildare, which the Gerald of Wales praised as “the work of angelic, and not human skill,” was beautifully illuminated, but was lost three centuries ago.

There is evidence that Brigid was a good friend of Saint Patrick’s and that the Trias Thaumaturga claimed, “Between St. Patrick and Brigid, the pillars of the Irish people, there was so great a friendship of charity that they had but one heart and one mind. Through him and through her Christ performed many great works.”

St Brigid of Ireland died around 525. She is said to have received the last sacraments from a priest, Saint Ninnidh, whose vocation she had encouraged. Veneration of Brigid grew in the centuries after her death, and spread outside of Ireland through the work of the country’s monastic missionaries.

St Brigid of Ireland or Kildare