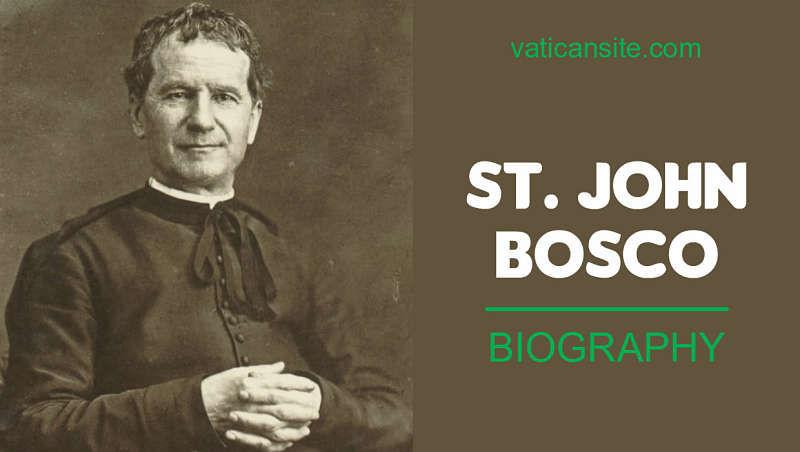 St John Bosco, popularly known as Don Bosco, was an Italian Roman Catholic priest and educator. He founded the Salesians of Don Bosco. His feast day is on January 31.

He was born in Becchi, Italy, on August 16, 1815. His birth came just after the end of the Napoleonic Wars which ravaged the area. Compounding the problems on his birthday, there was also a drought and a famine at the time of his birth.

At the age of two, John lost his father, Francis, leaving him and his two older brothers to be raised by his mother, Margherita. All who knew her called her Mama Margaret. She was declared venerable by the Church in 2006.

Raised primarily by his mother, John attended church and became very devout. When he was not in church, he helped his family grow food and raise sheep. They were very poor, but despite their poverty his mother also found enough to share with the homeless who sometimes came to the door seeking food, shelter or clothing.

When John was nine, the Master called him openly, he had the first of several vivid dreams that would influence his life. In his dream, he encountered a multitude of boys who swore as they played. Among these boys, he encountered a great, majestic man and woman. The man told him that in meekness and charity, he would “conquer these your friends.” Then a lady, also majestic said, “Be strong, humble and robust. When the time comes, you will understand everything.” This dream influenced John the rest of his life.

Not long afterwards, John witnessed a traveling troupe of circus performers. He was enthralled by their magic tricks and acrobatics. He realized if he learned their tricks, he could use them to attract others and hold their attention. He studied their tricks and learned how to perform some himself.

One Sunday evening, John staged a show for the kids he played with and was heartily applauded. At the end of the show, he recited the homily he heard earlier in the day. He ended by inviting his neighbors to pray with him. His shows and games were repeated and during this time, John discerned the call to become a priest.

To be a priest, John required an education, something he lacked because of poverty. However, he found a priest willing to provide him with some teaching and a few books. John’s older brother became angry at this apparent disloyalty, and he reportedly whipped John saying he’s “a farmer like us!”

John was undeterred, and as soon as he could he left home to look for work as a hired farm laborer. He was only 12 when he departed, a decision hastened by his brother’s hostility.

John had difficulty finding work, but managed to find a job at a vineyard. He labored for two more years before he met Jospeh Cafasso, a priest who was willing to help him. Cafasso himself would later be recognized as a saint for his work, particularly ministering to prisoners and the condemned.

In 1835, John entered the seminary and following six years of study and preparation, he was ordained a priest in 1841.

His first assignment was to the city of Turin. The city was in the throes of industrialization so it had slums and widespread poverty. It was into these poor neighborhoods that John, now known as Fr. Bosco, went to work with the children of the poor.

While visiting the prisons, Fr. Bosco noticed a large number of boys, between the ages of 12 and 18, inside. The conditions were deplorable, and he felt moved to do more to help other boys from ending up there.

He went into the streets and started to meet young men and boys where they worked and played. He used his talents as a performer, doing tricks to capture attention, then sharing with the children his message for the day.

When he was not preaching, Fr. Bosco worked tirelessly seeking work for boys who needed it, and searching for lodgings for others. His mother began to help him, and she became known as “Mamma Margherita.” By the 1860s, Fr. Bosco and his mother were responsible for lodging 800 boys.

Don Bosco also negotiated new rights for boys who were employed as apprentices. A common problem was the abuse of apprentices, with their employers using them to perform manual labor and menial work unrelated to their apprenticeship. Fr. Bosco negotiated contracts which forbade such abuse, a sweeping reform for that time. The boys he hired out were also given feast days off and could no longer be beaten.

He also identified boys he thought would make good priests and encouraged them to consider a vocation to the priesthood. Then, he helped to prepare those who responded favorably in their path to ordination.

Don Bosco was not without some controversy. Some parish priests accused him of stealing boys from their parishes. The Chief of Police of Turin was opposed to his catechizing of boys in the streets, which he claimed was political subversion.

In 1859, St John Bosco established the Society of St. Francis de Sales. He organized 15 seminarians and one teenage boy into the group. Their purpose was to carry on his charitable work, helping boys with their faith formation and to stay out of trouble. The organization still exists today and continues to help people, especially children around the world.

In the years that followed, Fr. Bosco expanded his mission, which had, and still has, much work to do.

St John Bosco died on January 31, 1888. The call for his canonization was immediate. Pope Pius XI knew Fr. Bosco personally and agreed, declaring him blessed in 1929. He was canonized on Easter Sunday, 1934 and he was given the title, “Father and Teacher of Youth.”

In 2002, Pope John Paul II was petitioned to declare Don Bosco the Patron of Stage Magicians. St. Bosco had pioneered the art of what is today called “Gospel Magic,” using magic and other feats to attract attention and engage the youth.