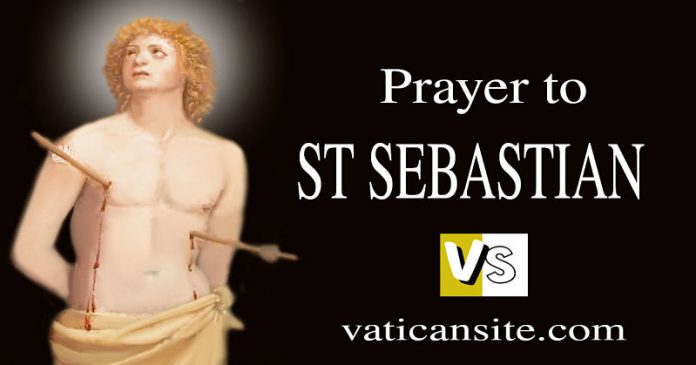 Patron of soldiers, athletes, and those who desire a saintly death

O Glorious St Sebastian, faithful follower of Jesus Christ, to you do we raise our hearts and hands to

implore your powerful intercession in obtaining from the God the Father all the helps and graces
necessary for our spiritual and temporal welfare, particularly the grace of living a holy life, courage to face
all perils of my believe and even to sacrifice my life as the cost of my faith and this special favour we now
implore………(mention it). O, special guardian from the diseases and accidents, we feel animated with
confidence that your intercession on my behalf will be graciously heard before throne of God.

We know he was from the area around Milan, Italy, and was an early Christian. He is buried somewhere along the Appian Way, the great stone-paved Roman road that can still be traveled, most likely near or in the spot now occupied by the Basilica of St. Sebastian.

His story, first recorded by St. Ambrose, goes like this: Sebastian was deeply upset by Emperor Diocletian’s persecution of Christians, so he joined the Roman army to help them from within. He hid his Christianity and became a member of the elite Praetorian Guard.

When Sebastian’s Christianity was discovered, Diocletian took a special interest in his punishment. He ordered Sebastian bound to a stake in a field, where a phalanx of archers shot him full of arrows. Ambrose described him as looking like a sea urchin, and dozens of artists have depicted the saint like a pincushion.