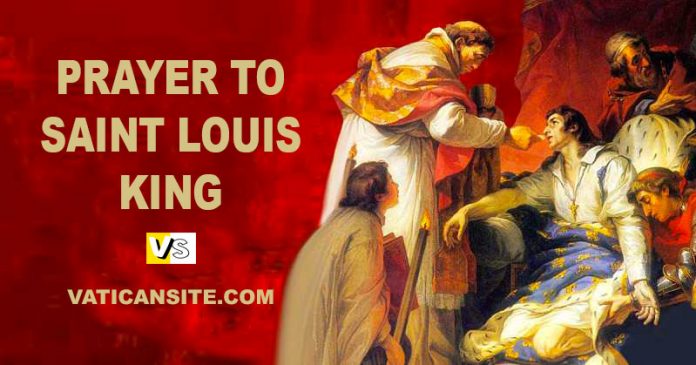 O holy King St. Louis, worthy son of our Holy Father St. Francis and patron of the Third Order, intercede for me with our Heavenly Father.

Obtain for me the grace to follow in thy footsteps, to be always a dutiful child of St. Francis, and to observe exactly, all the days of my life, that holy rule which thou loved so ardently and kept so faithfully.

Be my guide and protector, so that I may never stray from the path of virtue but increase daily in holiness and perfection, and finally merit to be numbered among the chosen ones of our Seraphic Father in Heaven. Amen.

O God, Who didst exalt blessed Louis Thy Confessor from an earthly realm to the glory of Thy Heavenly kingdom: grant, we pray Thee, that by his merits and intercession we may be made heirs of the King of Kings, Thy Son our Lord Jesus Christ, Who liveth and reigneth for ever and ever. Amen

St. Louis, King of France, patron of Tertiaries, was the ninth of his name. He was born at Poissy, France, in 1214.

His father was Louis VIII, and his mother was Blanche, daughter of Alfonso VIII of Castille, surnamed the Conqueror.

At the age of twelve he lost his father, and his mother became regent of the kingdom. From his tenderest infancy she had inspired him with a love for holy things.

In 1234, he married Margaret, the virtuous daughter of Raymond Berenger, Count of Provence, and two years later he took the reigns of government into his own hands.

In 1238, he headed a crusade, in which he fell a prisoner among the Mohammedans, but a truce was concluded and he was set free and he returned to France.

In 1267, he again set out for the East at the head of a crusade but he never again beheld his native land. In 1270, he was stricken by the pestilence at the siege of Tunis, and after receiving the Last Sacraments, he died. His feast day is August 25th.

PRAYER TO THE VIRGIN OF THE POOR

PRAYER FOR COURAGE AND STRENGTH