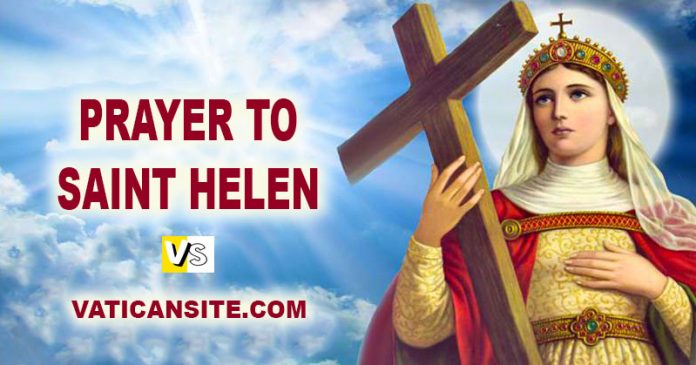 We are told that many years after the Crucifixion of Jesus, you traveled to the Holy Land, searching ceaselessly for the True Cross on which Our Lord died.

Legend has it that you did indeed excavate this holy relic, the image of our salvation.

I venerate your memory and the burning devotion to the crucified Creator
which you diaplayed. Help us all hold the Cross always in our hearts, remembering that Our Savior died, hanging on the cross, in expiation for all of our sins.

Please, Saint Helen, pray to God for me, and help me to be reminded each time
I see a cross, of the epochal sacrifice made for us, and the sweet salvation gained for us, by Jesus, Man, Son of God, and God Himself, in the divine mystery
of the Holy Trinity.

Empress mother of Constantine the Great. She was a native of Bithynia, who married the then Roman general Constantius I Chlorus about 270.

Constantine was born soon after, and in 293, Constantius was made Caesar, or junior emperor. He divorced Helena to marry co Emperor Maximian’s stepdaughter.

Constantine became emperor in 312 after the fateful victory at Milvian Bridge, and Helen was named Augusta, or empress.

She converted to Christianity and performed many acts of charity, including building churches in Rome and in the Holy Land. On a pilgrimage to the Holy Land, Helena discovered the True Cross.

She is believed to have died in Nicomedia. Her porphyry sarcophagus is in the Vatican Museum.

Geoffrey of Monmouth, England, started the legend that Helena was the daughter of the king of Colchester, a tradition no longer upheld.

In liturgical art Helen is depicted as an empress, holding a cross.

Prayer to Saint Mary of the Annunciation