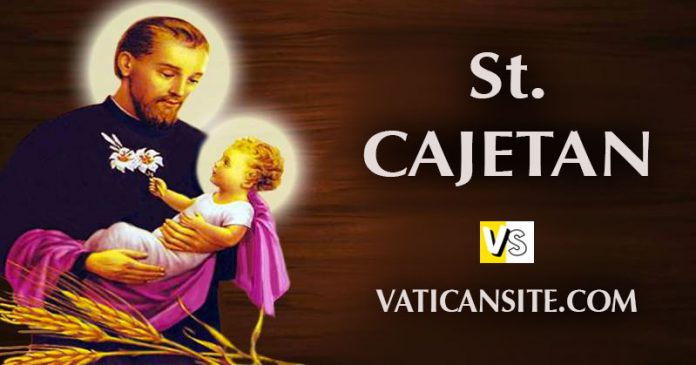 Glorious Saint Cajetan,
acclaimed by all people to be
the Divine Father of Providence,
because you provide miraculous aid
to all in need,
I stand here before you today,
asking that you present to the Lord,
our God the requests that I confidently
deposit in your hands.

May these graces that I now request,
help me to always seek the Kingdom of God
and His Righteousness, knowing that God
“who dresses with beauty the flowers of the
field and abundantly feeds the birds of the sky”
will provide the temporal and financial needs,
which are best for me.

Glorious Saint Cajetan,
Saint of Divine Providence,
intercede for us so that in our homes,
we may have peace, and never lack
bread or work. Amen

Saint Cajetan was ordained priest in 1516. He left the papal court and dedicated himself entirely to the service of the Lord. With his own hands he cared for the sick. Such zeal did he show for the salvation of his fellowmen that he was surnamed the “huntsman for souls.”

Saint Cajetan often prayed eight hours daily. While attending the Christmas celebration at Saint Mary of the Crib, he is said to have been given the grace of receiving from the Holy Virgin Mary the Child Jesus into his arms.

Saint Cajetan co-founded the Theatines in 1524, a community of priests who were to lead an apostolic life. They were to look with disdain all earthly belongings, to accept no salaries from the faithful; only from that which was freely donated were they allowed to retain the means of livelihood.

He founded a bank to help the poor and offer an alternative to usurers. It later became the Bank of Naples. His concern for the unemployed, giving them the necessary financial help in their time of need, made him their patron.

PRAYER OF THE SICK