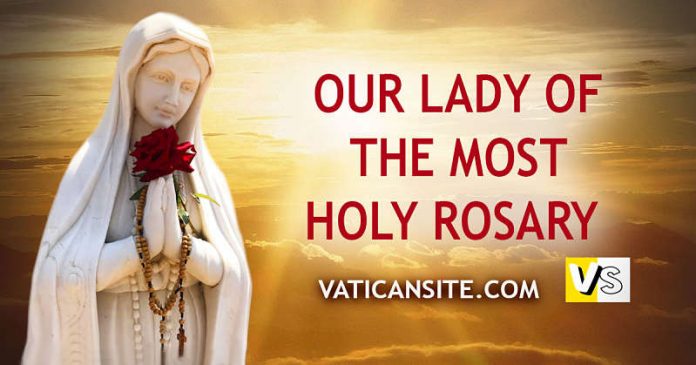 October 7: Our Lady of the Most Holy Rosary

Prayer to Our Lady of the Most Holy Rosary

O Queen of the Most Holy Rosary, in these times of such brazen impiety, manifest thy power with the signs of thine ancient victories.

From thy throne whence thou dispense pardon and grace, mercifully regard the Church of thy Son, His Vicar on Earth, and every order of clergy, religious, and laity, who are oppressed in this mighty conflict.

Thou who art powerful, the vanquisher of all heresies, hasten the hour of mercy, even though the hour of God’s justice is every day provoked by the countless sins of men, the sons and daughters of Adam.

Obtain for me, the least of men, kneeling before thee in supplication, the grace I need to live righteously upon earth, in order to be numbered among the just in heaven.

In the company of all faithful Christians throughout the world,
I salute thee and acclaim thee as Queen of the Most Holy Rosary.

Queen of the Most Holy Rosary pray for us.

OUR LADY of the ROSARY

It was the time when the impious heresy of the Albigensians was spreading throughout the district of Toulouse, striking its roots more deeply day by day.

Saint Dominic, who had but recently laid the foundations of the Order of Preachers, threw all his strength into the task of extirpating the wicked error.

To make his victory the more certain, he sought constantly and in earnest prayer the aid of the most blessed Virgin Mary, whose dignity had been most shamefully attacked by the heretics. It is given to her to destroy all heresies throughout the world.

Dominic was admonished by her – as everyone will recall – to preach devotion to the Rosary as a special weapon against heresy and vice.

It is astounding with what happy results he carried out this assignment… from the time of the Albigensian heresy onwards, this holy method of prayer began to be marvelously propagated and promoted by Saint Dominic.

The sovereign pontiffs, themselves, in encyclical letters have from time to time, confirmed the fact that Dominic was the founder and author of the rosary.

From this holy devotion countless benefits have been showered the length and the breadth of Christendom.

Among these most certainly can be reckoned that famous victory which the Christian princes, aroused by the plea of Pope St. Pius V, won over the Turks at Lepanto.

As this victory was won on the very day on which the confraternities of the most holy Rosary throughout the world were offering up their rosaries, as they had been asked to do, there can be no doubt that this victory was an answer to their prayers.

So convinced of this was Gregory XIII that he proclaimed that for so singular a blessing there should be offered everywhere on earth perpetual thanks to the blessed Virgin, under the title of the Rosary.

He decreed also that in every church where an altar of the Rosary had been erected, its office should be celebrated in perpetuity under the rite of a double major.

Other pontiffs, also have granted almost innumerable indulgences to the recitation of the Rosary and to the Rosary Confraternities.