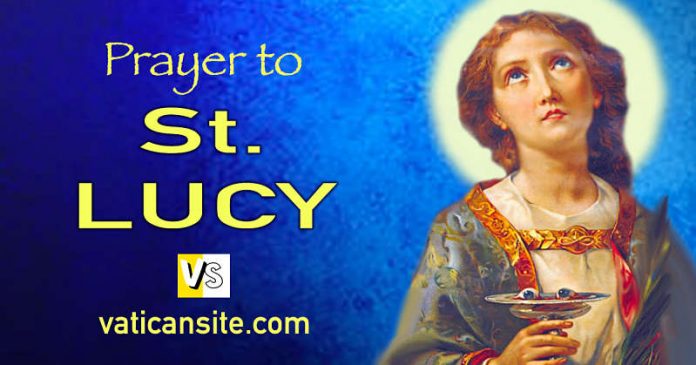 O St Lucy, you preferred to let your eyes be torn out instead of denying the faith and defiling your soul; and God, through an extraordinary miracle, replaced them with another pair of sound and perfect eyes to reward your virtue and faith, appointing you as the protector against eye diseases. I come to you for you to protect my eyesight and to heal the illness in my eyes.

O St Lucy, preserve the light of my eyes so that I may see the beauties of creation, the glow of the sun, the colour of the flowers and the smile of children.

Preserve also the eyes of my soul, the faith, through which I can know my God, understand His teachings, recognise His love for me and never miss the road that leads me to where you, St Lucy, can be found in the company of the angels and saints.

St Lucy, protect my eyes and preserve my faith!

Lucy means “light”, with the same Latin root, lux. Ironically, St Lucy’s history is shrouded in darkness: all that is really known for certain is that she was a martyr in Syracuse, Italy during Diocletian’s persecutions of A.D. 304. Her veneration spread to Rome, so that by the 6th century the whole Church recognized her courage in defense of the faith.

Because people wanted to shed light on Lucy’s bravery, legends grew up, reported in the Acta that are associated with her name. All the details are conventional ones also associated with other female martyrs of the early 4th century. Her Roman father died when she was young, leaving her and her mother without a protecting guardian. Her mother, Eutychia, had suffered four years with a “bloody flux” but Lucy having heard the renown of Saint Agatha the patroness of Catania, “and when they were at a Mass, one read a gospel which made mention of a woman which was healed of the bloody flux (dysentery) by touching of the hem of the coat of Jesus Christ,” which, according to Legenda Aurea, convinced her mother to pray together at Saint Agatha’s tomb. They stayed up all night praying, until they fell asleep, exhausted. Saint Agatha appeared in a vision to Lucy and said, “Soon you shall be the glory of Syracuse, as I am of Catania.” At that instant Eutychia was cured.

Eutychia had arranged a marriage for Lucy with a pagan bridegroom, but Lucy urged that the dowry be spent on alms so that she might retain her virginity. Euthychia suggested that the sums would make a good bequest, but Lucy countered, “…whatever you give away at death for the Lord’s sake you give because you cannot take it with you. Give now to the true Savior, while you are healthy, whatever you intended to give away at your death.” News that the patrimony and jewels were being distributed came to the ears of Lucy’s betrothed, who heard from a chattering nurse that Lucy had found a nobler Bridegroom.

Her rejected pagan bridegroom denounced Lucy as a Christian to the magistrate Paschasius, who ordered her to burn a sacrifice to the Emperor’s image. Lucy replied that she had given all that she had: “I offer to him myself, let him do with his offering as it pleaseth him.” Sentenced to be defiled in a brothel, Lucy asserted:

No one’s body is polluted so as to endanger the soul if it has not pleased the mind. If you were to lift my hand to your idol and so make me offer against my will, I would still be guiltless in the sight of the true God, who judges according to the will and knows all things. If now, against my will, you cause me to be polluted, a twofold purity will be gloriously imputed to me. You cannot bend my will to your purpose; whatever you do to my body, that cannot happen to me
The Christian tradition states that when the guards came to take her away they found her so filled with the Holy Spirit that she was stiff and heavy as a mountain; they could not move her even when they hitched her to a team of oxen. Even with a dagger through her throat she prophesied against her persecutor. As final torture, her eyes were gouged out. She was miraculously still able to see without her eyes. In paintings and statues, St. Lucy is frequently shown holding her eyes on a golden plate.

She is the patron saint of eyes

NOVENA OF THE HOLY CLOAK OF SAINT JOSEPH