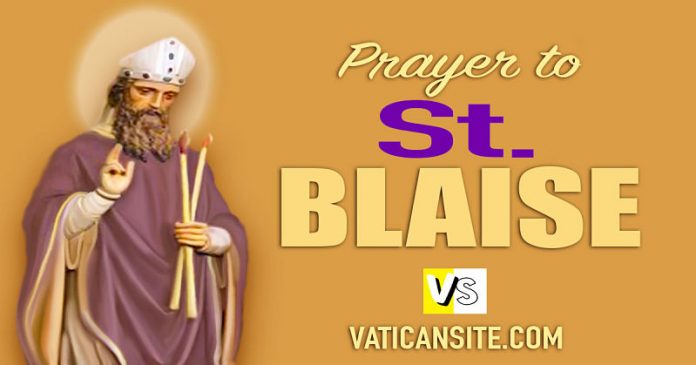 The Blessing of the Throats that take place on this day. Two candles are blessed, held slightly open, and pressed against the throat as the blessing is said.

O Blessed St Blaise, you received from God the power to protect men from throat diseases and other maladies. Take away the illness that afflicts me, keep my throat healthy and perfect so that I can talk correctly and be able to proclaim and sing praises to God.

I promise you, St Blaise, that the words coming from my mouth will always speak:

The truth and not lies; justice and not calumnies; goodness and not harshness; comprehension and not intransigence; forgiveness and not condemnation; pardon and not accusation; respect and not disparagement.

St Blaise, keep my throat free from illness so that I can praise God, my Creator, and thank you, my protector.
Amen.

Many Catholics might remember Saint Blaise’s feast day, February 3, because of the Blessing of the Throats that take place on this day. Two candles are blessed, held slightly open, and pressed against the throat as the blessing is said.
Very few facts are known about Saint Blaise. It is believed he was a bishop of Sebastea in Armenia who was martyred under the reign of Licinius in the early fourth century.

The legend of St. Blaise tells us that he was born into a rich and noble family who raised him as a Christian. He became a bishop. Later, a new persecution of Christians began. He received a message from God to go into the hills to escape persecution. Hunters discovered a cave surrounded by wild animals who were sick. Blaise walked among them unafraid, curing them of their illnesses.

The hunters recognized Blaise as a Bishop, so they captured him to take him back for trial. On the way back, he talked a wolf into releasing a pig that belonged to a poor woman. When Blaise was sentenced to be starved to death, the woman, in gratitude, sneaked into the prison with food and candles. Finally, the governor had Blaise killed.

Saint Blase is the patron of physicians, sick cattle, wax- chandlers, woolcombers, and of wild animals because of his care for them and of those with throat maladies. He is invoked against afflictions of the throat (Bentley, Roeder).

PRAYER TO SAINT ROSE OF LIMA