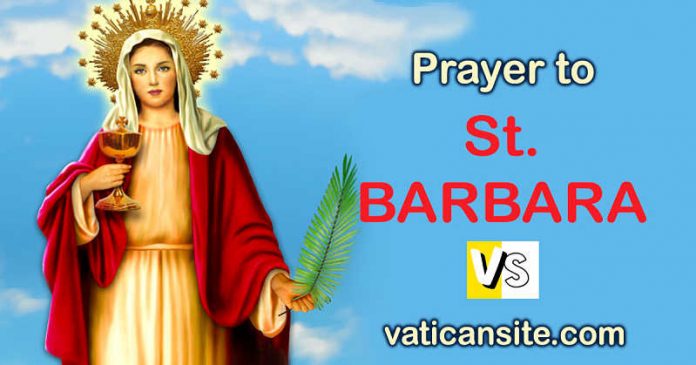 St. Barbara, venerated by soldiers and invoked as a protector against lightning, storms, hurricanes and sedden death. Is one of the fourteen holy helpers of emergency situations.
St Barbara, you are stronger than the tower of a fortress and the fury of hurricanes. Do not let lightning hit me, thunder frighten me or the roar of canons jolt my courage or bravery. Stay always by my side so that I may confront all the storms and battles of my life with my head held high and a serene countenance. Winning all the struggles, may I, aware of doing my duty, be grateful to you, my protector, and render thanks to God, the Creator of heaven, earth and nature who has the power to dominate the fury of the storm and to mitigate the cruelty of war.

St Barbara, pray for us.
Amen.

According to tradition, St Barbara was martyred at the end of the fourth century in Antioch under the emperor Maximian. St Barbara spent almost her entire life confined in the tower of a fortress. When he heard that she had been converted to the Christian faith even in confinement, her father, who was a pagan, not only denounced her but also condemned her to death. He himself was the executioner and cut off her head with a sword. Immediately afterwards, a terrible storm arose and the executioner was incinerated by a bolt of lightning.

THE INVOCATIONS OF ST. JUDE