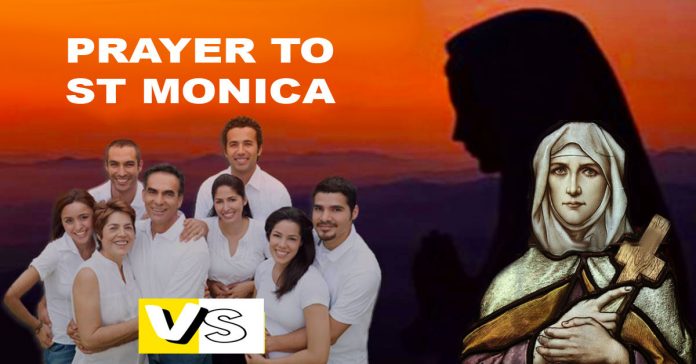 Blessed Monica, mother of St. Augustine,
we give thanks to our Father in Heaven
Who looked with mercy upon your tears
over your wayward son.
His conversion and heroic sanctification
were the fruit of your prayers.

Dear St. Monica
we now ask you to pray with us
for all those sons and daughters that have wandered away  from God,
and to add your prayers to those of all mothers
who are worried over their children.
Pray also for us that,
following your example, we may,
in the company of our children,
one day enjoy the eternal vision of our Father in Heaven.

Saint Monica, also known as Monica of Hippo, is St. Augustine of Hippo’s mother. She was born in 331 A.D. in Tagaste, which is present-day Algeria.

When she was very young, she was married off to the Roman pagan Patricius, who shared his mother’s violent temper. Patricius’ mother lived with the couple and the duo’s temper flares proved to be a constant challenge to young Monica.

While Monica’s prayers and Christian deeds bothered Patricius, he is said to have respected her beliefs.

Three children were born to Monica and Patricius: Augustine, Navigius, and Perpetua. Unfortunately, Monica was unable to baptize her children and when Augustine fell ill, Monica pleaded with Patricius to allow their son to be baptized.

Patricius allowed it, but when Augustine was healthy again, he withrew his permission.

For years Monica prayed for her husband and mother-in-law, until finally, one year before Patricius’ death, she successfully converted them.

As time passed, Perpetua and Navigius entered the religious life, but unfortunately Augustine became lazy and uncouth. This greatly worried Monica, so when Patricius died, she sent the 17-year-old Augustine to Carthage for schooling.

While in Carthage, Augustine became a Manichaean, which was a major religion that saw the world as light and darkness, and when one died, they were removed from the world of matter and returned to the world of light, which is where life comes from.

Novena to the Holy Face of Jesus