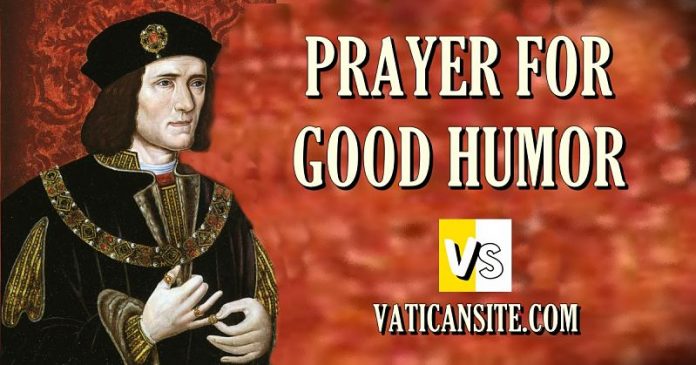 Grant me oh Lord, good digestion,
and also something to digest.

Grant me a healthy body, and
the necessary good humor to maintain it.

Grant me a simple soul that knows
to treasure all that is good
and that doesn’t frighten easily at the sight of evil,
but rather finds the means to put things
back in their place.

Give me a soul that knows not boredom,
grumbles, sighs, and laments,
nor excess of stress, because of that
obstructing thing called “I.”

Grant me O Lord, a good sense of humor,
Allow me the grace to be able to take a joke
to discover in life a bit of joy,
and to be able to share it with others.

Saint Thomas More is the patron of lawyers, large families, and politicians. He is well-known for his depth of knowledge and hard stance against heresy, divorce, and refusal to swear the Oath of Supremacy which is a declaration that the king is the head of the church in England. St. Thomas More was beheaded for refusing to change his religious beliefs to the king’s political needs. St. Thomas More’s feast day is June 22nd. Died 6 July 1535 (aged 57).-

More’s best known and most controversial work, Utopia is a novel written in Latin. More completed and theologian Erasmus published the book in Leuven in 1516, but it was only translated into English and published in his native land in 1551 (16 years after his execution), and the 1684 translation became the most commonly cited.

Utopia contrasts the contentious social life of European states with the perfectly orderly, reasonable social arrangements of Utopia and its environs (Tallstoria, Nolandia, and Aircastle).

Utopia gave rise to a literary genre, Utopian and dystopian fiction, which features ideal societies or perfect cities, or their opposite.

PRAYER FOR THE SICK TO SAINT PANTALEON