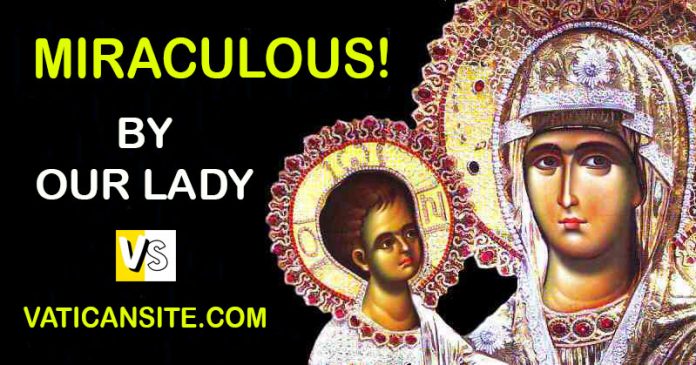 Today, the root of Jesse has produced its shoot:
she will bring forth a Divine flower for the world.
Today, the Creator of all things,
God the Word,
composes a new book:
a book issuing from the heart of his Father
and written by the Holy Spirit,
who is the tongue to God.

O daughter of King David and Mother of God,
the universal King;
O Divine and living object
whose beauty has charmed God the Creator;
your whole soul is completely open
to God’s action and attentive to God alone.

All your desires are centered
only on what merits to be sought
and is worthy of love.
You harbour anger only for sin and its author.
You will have a life superior to nature,
but not for your own sake.
For it has not been created for you
but has been entirely consecrated to God,
who has introduced you into the world
to help bring about our salvation
in fulfillment of his plan,
the Incarnation of his Son
and the Divinization of the human race.

Your heart will find nourishment in the words of God,
like the tree planted near the living waters of the Spirit,
like the tree of life
that has yielded its fruit in due time,
the incarnate God who is the life of all things.

Your ears will be ever attentive to the Divine words
and the sounds of the harp of the Spirit,
through whom the Word has come to take on our flesh.
Your nostrils will inhale the fragrance of the Bridegroom,
the Divine fragrance with which He scented His humanity.

Your lips will savour the words of God
and will rejoice in their Divine sweetness.
Your most pure heart,
free from all stain,
will ever see the God of all purity
and will experience ardent desire for Him.

Your womb will be the abode
of the one whom no place can contain.
Your milk will provide nourishment for God,
in the little Infant Jesus.
Your hands will carry God,
and your knees will serve
as a throne for Him
that is more noble
than the throne of the Cherubim.

Your feet, led by the light of the Divine Law,
will follow Him along an undeviating course
and guide you to the possession of the Beloved.

You are the temple of the Holy Spirit,
the city of the living God,
made joyous by abundant flowers,
the sacred flowers of Divine grace.
You are all-beautiful
and very close to God,
above the Cherubim
and higher than the Seraphim,
right near God Himself!

Miraculous Cure of Saint John Damascene by Our Lady

The Abbot Orsini wrote: “In the year 723, in the night following the day when the prince of the Saracens had unjustly ordered the hand of Saint John Damascen to be cut off, Our Lady reunited it miraculously to his wrist, after this faithful servant had prayed to her for it with the design of continuing to write in defense of holy images.”

According to tradition, a Muslim caliph unjustly ordered that Saint John’s right hand should be cut off and hung up for public display. Some days after this despicable act took place, Saint John prayed for the restoration of his hand. Saint John had an icon of the Blessed Virgin before which he fervently prayed, and soon his hand is said to have been miraculously restored. To recognize the miracle, and in appreciation for the return of his right hand, Saint John had a replica of his restored hand produced in silver, which he then placed at the bottom of the icon. Those who came after him, and saw the third hand on the icon, subsequently named it “Three-handed,” or Tricheirousa.

The Bogorodica Trojerucica is considered the most important icon of the Serbian Orthodox Church. It is currently located in a monastery of Hilandar on Mount Athos, Greece. The portrait is of the Blessed Virgin Mary with the Divine Child in her right arm. It is thought to have possibly been painted by Saint John Damascene himself, but however that may be, it is the very same image before which he prayed for the restoration of his severed hand.

“Gratitude for the benefits received at the hands of the Lord is a virtue so noble, that by means of it we may preserve our intercourse and correspondence with God Himself: He, as rich, generous and powerful conferring upon us his gifts; we, as poor, humble and aware of our needs, returning for them our thanks. He desires to give us plentifully, but at the same time He wishes us to be grateful, rendering Him the glory, honor and praise contained in gratitude.” *

PRAYER TO THE QUEEN OF PACE

Prayer to Our Lady of the New Advent