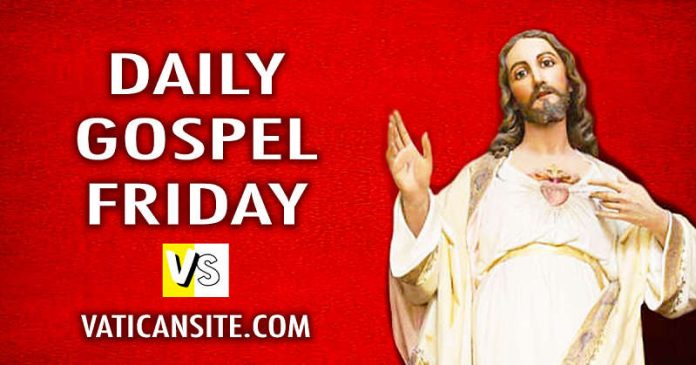 Friday of the Second week of Lent

Israel loved Joseph best of all his sons, for he was the child of his old age; and he had made him a long tunic.

When his brothers saw that their father loved him best of all his sons, they hated him so much that they would not even greet him.

One day, when his brothers had gone to pasture their father’s flocks at Shechem, Israel said to Joseph, “Your brothers, you know, are tending our flocks at Shechem. Get ready; I will send you to them.”

“I am ready,” Joseph answered.

The man told him, “They have moved on from here; in fact, I heard them say, ‘Let us go on to Dothan.'” So Joseph went after his brothers and caught up with them in Dothan.

They noticed him from a distance, and before he came up to them, they plotted to kill him.

They said to one another: “Here comes that master dreamer!

Come on, let us kill him and throw him into one of the cisterns here; we could say that a wild beast devoured him. We shall then see what comes of his dreams.”

When Reuben heard this, he tried to save him from their hands, saying: “We must not take his life.

Instead of shedding blood,” he continued, “just throw him into that cistern there in the desert; but don’t kill him outright.” His purpose was to rescue him from their hands and restore him to his father.

So when Joseph came up to them, they stripped him of the long tunic he had on; then they took him and threw him into the cistern, which was empty and dry.

They then sat down to their meal. Looking up, they saw a caravan of Ishmaelites coming from Gilead, their camels laden with gum, balm and resin to be taken down to Egypt.

Judah said to his brothers: “What is to be gained by killing our brother and concealing his blood?

Rather, let us sell him to these Ishmaelites, instead of doing away with him ourselves. After all, he is our brother, our own flesh.” His brothers agreed.

They sold Joseph to the Ishmaelites for twenty pieces of silver. Some Midianite traders passed by, and they pulled Joseph up out of the cistern and took him to Egypt.

When the LORD called down a famine on the land
and ruined the crop that sustained them,
He sent a man before them,
Joseph, sold as a slave.

They had weighed him down with fetters,
and he was bound with chains,
Till his prediction came to pass
and the word of the LORD proved him true.

The king sent and released him,
the ruler of the peoples set him free.
He made him lord of his house
and ruler of all his possessions.

Jesus said to the chief priests and the elders of the people: “Hear another parable. There was a landowner who planted a vineyard, put a hedge around it, dug a wine press in it, and built a tower. Then he leased it to tenants and went on a journey.

When vintage time drew near, he sent his servants to the tenants to obtain his produce.

But the tenants seized the servants and one they beat, another they killed, and a third they stoned.

Again he sent other servants, more numerous than the first ones, but they treated them in the same way.

Finally, he sent his son to them, thinking, ‘They will respect my son.’

But when the tenants saw the son, they said to one another, ‘This is the heir. Come, let us kill him and acquire his inheritance.’

They seized him, threw him out of the vineyard, and killed him.

What will the owner of the vineyard do to those tenants when he comes?”

They answered him, “He will put those wretched men to a wretched death and lease his vineyard to other tenants who will give him the produce at the proper times.”

Jesus said to them, “Did you never read in the scriptures: ‘The stone that the builders rejected has become the cornerstone; by the Lord has this been done, and it is wonderful in our eyes’?

Therefore, I say to you, the kingdom of God will be taken away from you and given to a people that will produce its fruit.

When the chief priests and the Pharisees heard his parables, they knew that he was speaking about them.

And although they were attempting to arrest him, they feared the crowds, for they regarded him as a prophet.