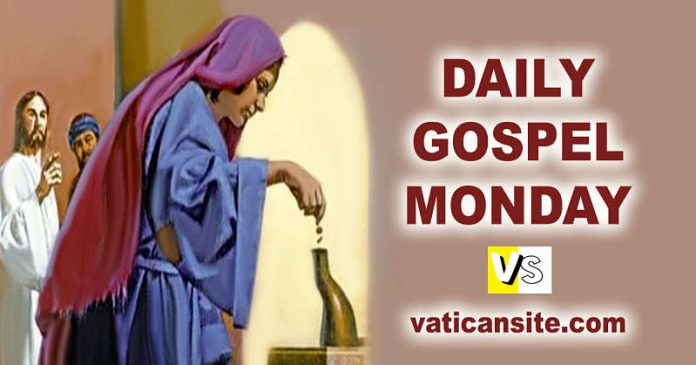 Monday of the Thirty-fourth week in Ordinary Time

I, John, looked and there was the Lamb standing on Mount Zion, and with him a hundred and forty-four thousand who had his name and his Father’s name written on their foreheads.
I heard a sound from heaven like the sound of rushing water or a loud peal of thunder. The sound I heard was like that of harpists playing their harps.
They were singing (what seemed to be) a new hymn before the throne, before the four living creatures and the elders. No one could learn this hymn except the hundred and forty-four thousand who had been ransomed from the earth.
These are they who were not defiled with women; they are virgins and these are the ones who follow the Lamb wherever he goes. They have been ransomed as the firstfruits of the human race for God and the Lamb.
On their lips no deceit has been found; they are unblemished.

Holy Gospel of Jesus Christ according to Saint Luke 21:1-4.

When Jesus looked up he saw some wealthy people putting their offerings into the treasury
and he noticed a poor widow putting in two small coins.
He said, “I tell you truly, this poor widow put in more than all the rest; for those others have all made offerings from their surplus wealth, but she, from her poverty, has offered her whole livelihood.”