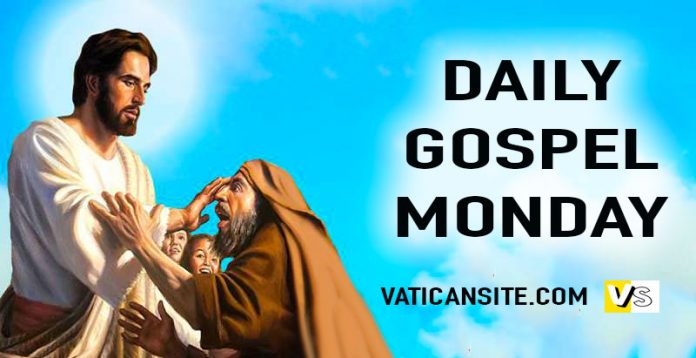 Monday of the Thirty-third week in Ordinary Time

[From the descendants of Alexander’s officers] there sprang a sinful offshoot, Antiochus Epiphanes, son of King Antiochus, once a hostage at Rome. He became king in the year one hundred and thirty seven of the kingdom of the Greeks.

In those days there appeared in Israel men who were breakers of the law, and they seduced many people, saying: “Let us go and make an alliance with the Gentiles all around us; since we separated from them, many evils have come upon us.”

The proposal was agreeable; some from among the people promptly went to the king, and he authorized them to introduce the way of living of the Gentiles.

Thereupon they built a gymnasium in Jerusalem according to the Gentile custom.

They covered over the mark of their circumcision and abandoned the holy covenant; they allied themselves with the Gentiles and sold themselves to wrongdoing.

Then the king wrote to his whole kingdom that all should be one people, each abandoning his particular customs. All the Gentiles conformed to the command of the king, and many Israelites were in favor of his religion; they sacrificed to idols and profaned the sabbath.

On the fifteenth day of the month Chislev, in the year one hundred and forty-five, the king erected the horrible abomination upon the altar of holocausts, and in the surrounding cities of Judah they built pagan altars.

They also burnt incense at the doors of houses and in the streets.

Any scrolls of the law which they found they tore up and burnt.

Whoever was found with a scroll of the covenant, and whoever observed the law, was condemned to death by royal decree.

But many in Israel were determined and resolved in their hearts not to eat anything unclean; they preferred to die rather than to be defiled with unclean food or to profane the holy covenant; and they did die. Terrible affliction was upon Israel.

Indignation seizes me because of the wicked
who forsake your law.
Though the snares of the wicked are twined about me,
your law I have not forgotten.

Redeem me from the oppression of men,
that I may keep your precepts.
I am attacked by malicious persecutors
who are far from your law.

Far from sinners is salvation,
because they seek not your statutes.
I beheld the apostates with loathing,
because they kept not to your promise.

Holy Gospel of Jesus Christ according to Saint Luke 18:35-43.

As Jesus approached Jericho a blind man was sitting by the roadside begging, and hearing a crowd going by, he inquired what was happening.

They told him, “Jesus of Nazareth is passing by.”

He shouted, “Jesus, Son of David, have pity on me!”

The people walking in front rebuked him, telling him to be silent, but he kept calling out all the more, “Son of David, have pity on me!”

Then Jesus stopped and ordered that he be brought to him; and when he came near, Jesus asked him, What do you want me to do for you? He replied, “Lord, please let me see.”
Jesus told him, “Have sight; your faith has saved you.”

He immediately received his sight and followed him, giving glory to God. When they saw this, all the people gave praise to God.