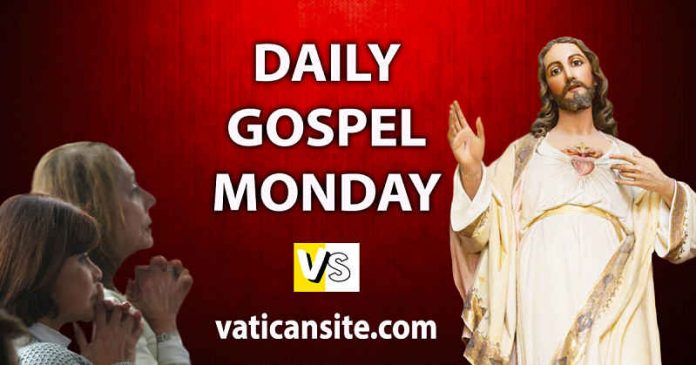 Monday of the Thirty-second week in Ordinary Time

Paul, a slave of God and Apostle of Jesus Christ for the sake of the faith of God’s chosen ones and the recognition of religious truth, in the hope of eternal life that God, who does not lie, promised before time began, who indeed at the proper time revealed his word in the proclamation with which I was entrusted by the command of God our savior, to Titus, my true child in our common faith: grace and peace from God the Father and Christ Jesus our savior.
For this reason I left you in Crete so that you might set right what remains to be done and appoint presbyters in every town, as I directed you, on condition that a man be blameless, married only once, with believing children who are not accused of licentiousness or rebellious.
For a bishop as God’s steward must be blameless, not arrogant, not irritable, not a drunkard, not aggressive, not greedy for sordid gain, but hospitable, a lover of goodness, temperate, just, holy, and self-controlled, holding fast to the true message as taught so that he will be able both to exhort with sound doctrine and to refute opponents.

Holy Gospel of Jesus Christ according to Saint Luke 17:1-6.

Jesus said to his disciples, “Things that cause sin will inevitably occur, but woe to the person through whom they occur.
It would be better for him if a millstone were put around his neck and he be thrown into the sea than for him to cause one of these little ones to sin.
Be on your guard! If your brother sins, rebuke him; and if he repents, forgive him.
And if he wrongs you seven times in one day and returns to you seven times saying, ‘I am sorry,’ you should forgive him.”
And the apostles said to the Lord, “Increase our faith.”
The Lord replied, “If you have faith the size of a mustard seed, you would say to (this) mulberry tree, ‘Be uprooted and planted in the sea,’ and it would obey you.