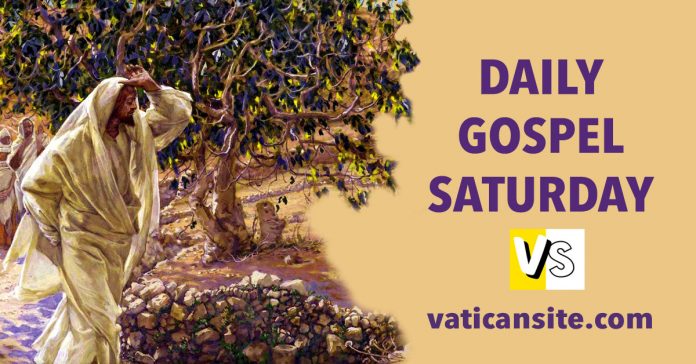 Saturday of the Twenty-ninth week in Ordinary Time

Brothers and sisters: Grace was given to each of us according to the measure of Christ’s gift.
Therefore, it says: “He ascended on high and took prisoners captive; he gave gifts to men.”
What does “he ascended” mean except that he also descended into the lower (regions) of the earth?
The one who descended is also the one who ascended far above all the heavens, that he might fill all things.
And he gave some as apostles, others as prophets, others as evangelists, others as pastors and teachers, to equip the holy ones for the work of ministry, for building up the body of Christ, until we all attain to the unity of faith and knowledge of the Son of God, to mature manhood, to the extent of the full stature of Christ, so that we may no longer be infants, tossed by waves and swept along by every wind of teaching arising from human trickery, from their cunning in the interests of deceitful scheming.
Rather, living the truth in love, we should grow in every way into him who is the head, Christ, from whom the whole body, joined and held together by every supporting ligament, with the proper functioning of each part, brings about the body’s growth and builds itself up in love.

I rejoiced because they said to me,
“We will go up to the house of the LORD.”
And now we have set foot
within your gates, O Jerusalem.

Jerusalem, built as a city
with compact unity.
To it the tribes go up,
the tribes of the LORD.

In it are set up judgment seats,
seats for the house of David.

Holy Gospel of Jesus Christ according to Saint Luke 13:1-9.

Gospel according to Saint Luke 18:1-8. CATHOLIC