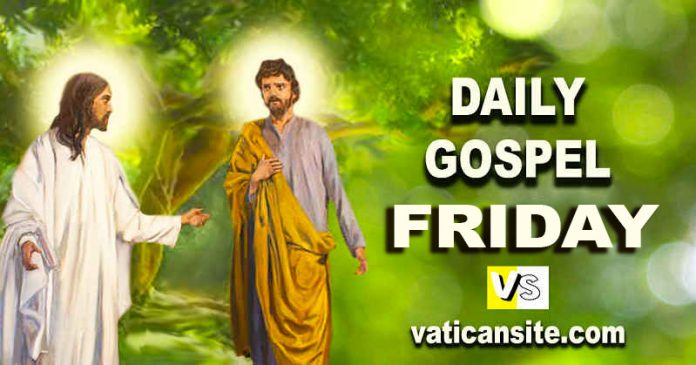 Beloved: This is the message you have heard from the beginning: we should love one another, unlike Cain who belonged to the evil one and slaughtered his brother. Why did he slaughter him? Because his own works were evil, and those of his brother righteous.

Do not be amazed, (then,) brothers, if the world hates you.

We know that we have passed from death to life because we love our brothers. Whoever does not love remains in death.

Everyone who hates his brother is a murderer, and you know that no murderer has eternal life remaining in him.

The way we came to know love was that he laid down his life for us; so we ought to lay down our lives for our brothers.

If someone who has worldly means sees a brother in need and refuses him compassion, how can the love of God remain in him?

Beloved, if (our) hearts do not condemn us, we have confidence in God

Sing joyfully to the LORD all you lands;
serve the LORD with gladness;
come before him with joyful song.

Holy Gospel of Jesus Christ according to Saint John 1:43-51.

Jesus decided to go to Galilee, and he found Philip. And Jesus said to him, “Follow me.”
Now Philip was from Bethsaida, the town of Andrew and Peter.

Philip found Nathanael and told him, “We have found the one about whom Moses wrote in the law, and also the prophets, Jesus, son of Joseph, from Nazareth.”

Jesus saw Nathanael coming toward him and said of him, “Here is a true Israelite. There is no duplicity in him.”

Nathanael said to him, “How do you know me?” Jesus answered and said to him, “Before Philip called you, I saw you under the fig tree.”

Jesus answered and said to him, “Do you believe because I told you that I saw you under the fig tree? You will see greater things than this.”

And he said to him, “Amen, amen, I say to you, you will see the sky opened and the angels of God ascending and descending on the Son of Man.”

Gospel according to Saint Luke 16:1-8. CATHOLIC