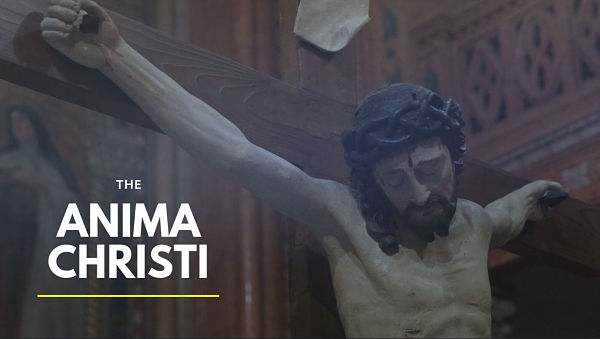 Soul of Christ, sanctify me
Body of Christ, save me
Blood of Christ, inebriate me
Water from Christ’s side, wash me
Passion of Christ, strengthen me
O good Jesus, hear me
Within Thy wounds hide me
Suffer me not to be separated from Thee
From the malicious enemy defend me
In the hour of my death call me
And bid me come unto Thee
That I may praise Thee with Thy saints
and with Thy angels
Forever and ever

Inigo Lopez of Loyola born in 1491, the man known as Ignatius of Loyola entered the world in Loiola, Spain. At the time, the name of the village was spelled “Loyola,” hence the discrepancy. Inigo came of age in Azpeitia, in northern Spain. Loyola is a small village at the southern end of Azpeitia.

He was a Spanish Basque priest and theologian, who founded the religious order called the Society of Jesus -Jesuits- and became its first Superior General. The Jesuit order served the Pope as missionaries, and they were bound by a vow of special obedience to the sovereign pontiff in regard to the missions.

In 1521 Ignatius was gravely wounded in a battle with the French. While recuperating, Ignatius Loyola experienced a conversion. Reading the lives of Jesus and the saints made Ignatius happy and aroused desires to do great things. Ignatius realized that these feelings were clues to God’s direction for him.

Saint Ignatius is remembered as a talented spiritual director. He recorded his method in a celebrated treatise called the Spiritual Exercises, a simple set of meditations, prayers, and other mental exercises, first published in 1548.

Ignatius was beatified in 1609, and then canonized, receiving the title of Saint on March 12, 1622. His feast day is celebrated on July 31.

He is the patron saint of the Basque provinces of Gipuzkoa and Biscay as well as the Society of Jesus, and was declared patron saint of all spiritual retreats by Pope Pius XI in 1922. Ignatius is also a foremost patron saint of soldiers, , educators and education.

DAY 3 – THREE DAYS OF PRAYER TO THE SACRED HEART...