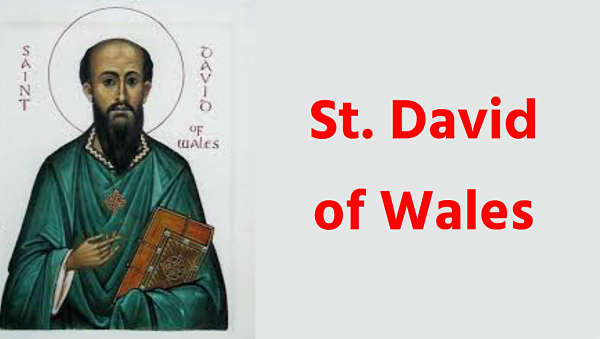 Among Welsh Catholics, as well as those in England, March 1 is the liturgical celebration of Saint David of Wales.

St. David is the patron of the Welsh people, remembered as a missionary bishop and the founder of many monasteries during the sixth century.

David was a popular namesake for churches in Wales prior to the Anglican schism, and his feast day is still an important religious and civic observance.

Although Pope Benedict XVI did not visit Wales during his 2010 trip to the U.K., he blessed a mosaic icon of its patron, and delivered remarks praising St. David as “one of the great saints of the sixth century, that golden age of saints and missionaries in these isles, and…thus a founder of the Christian culture which lies at the root of modern Europe.”

In his comments, Pope Benedict recalled the saint’s dying words to his monastic brethren: “Be joyful, keep the faith, and do the little things.” He urged that St. David’s message, “in all its simplicity and richness, continue to resound in Wales today, drawing the hearts of its people to renewed love for Christ and his Church.”

From a purely historical standpoint, little is known of David’s life, with the earliest biography dating from centuries after his time. As with some other saints of sixth-century Wales, even the chronology of his life is not easy to ascertain.

David’s conception is said to have occurred as a result of rape – a detail that seems unlikely to have been invented by later biographers, though it cannot (like almost all of the traditions surrounding his life) be established with certainty. His mother Saint Nonna, or Nonnita, has her traditional feast day on March 3.

David appears to have been the cousin of his contemporary Saint Teilo, another Welsh bishop and monk. He is described as a pupil of the monastic educator Saint Paulinus, who was one of St. Teilo’s teachers as well. There are doubts, however, about the story which holds that David and Teilo traveled to Jerusalem and were ordained together as bishops.

It is clear that David served as the Bishop of Menevia, an important port city linking Wales and Ireland in his time. His leading role in two local councils of the Church is also a matter of record.

Twelve monasteries have their founding ascribed to David, who developed a reputation for strict asceticism. His monks modeled their lives on the earliest desert hermits – combining hard manual labor, silence, long hours of prayer, and a diet that completely excluded meat and alcohol.

One tradition places his death in the year 601, but other writers believe he died in the 540s. David may well have survived to an advanced age, but evidence is lacking for the claim (made by his 11th-century biographer) that he lived to the age of 147. Pope Callistus II canonized St. David of Wales in 1120.