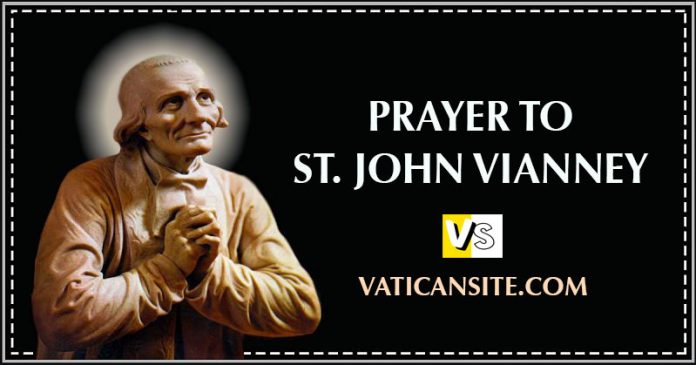 The patron of parish priests worldwide.

Dear Saint John Vianney,
your childhood dream was to be a Priest,
to win souls for God.

You endured years of toil and humiliation
to attain the Priesthood.

You became a priest truly after God’s own heart,
outstanding in humulity and poverty; prayer and mortification.

Totally devoted to the service of God’s people.

The Church has exalted you as model
and patron saint of all Parish priests,
trusting that your example and prayers
will help them to live up
to the high dignity of their vocation
to be faithful servants of God’s people,
to be perfect imitators of Christ the Saviour
Who came not to be served but to serve,
to give His Life in ransom for many.

Pray that God may give to His Church today
many more priests after His own Heart.

Pray for all the priests under your patronage,
that they may be worthy representatives
of Christ the Good Shepherd.

May they wholeheartedly devote themselves
to prayer and penance;
be examples of humility and poverty;
shining modelss of holiness;
tireless and powerful preachers of the Word of God;
zealous dispensers of God’s Grace in the Sacraments.

May their loving devotion to Jesus in the Eucharist
and to Mary His Mother
be the Twin Fountains of fruitfulness for their ministry.

A man with vision overcomes obstacles and performs deeds that seem impossible. John Vianney was a man with vision: He wanted to become a priest. But he had to overcome his meager formal schooling, which inadequately prepared him for seminary studies.

His failure to comprehend Latin lectures forced him to discontinue. But his vision of being a priest urged him to seek private tutoring. After a lengthy battle with the books, John was ordained.

Situations calling for “impossible” deeds followed him everywhere. As pastor of the parish at Ars, John encountered people who were indifferent and quite comfortable with their style of living. His vision led him through severe fasts and short nights of sleep.

With Catherine Lassagne and Benedicta Lardet, he established La Providence, a home for girls. Only a man of vision could have such trust that God would provide for the spiritual and material needs of all those who came to make La Providence their home.

His work as a confessor is John Vianney’s most remarkable accomplishment. In the winter months he was to spend 11 to 12 hours daily reconciling people with God. In the summer months this time was increased to 16 hours. Unless a man was dedicated to his vision of a priestly vocation, he could not have endured this giving of self day after day.

Many people look forward to retirement and taking it easy, doing the things they always wanted to do but never had the time. But John Vianney had no thoughts of retirement. As his fame spread, more hours were consumed in serving God’s people. Even the few hours he would allow himself for sleep were disturbed frequently by the devil.

Who, but a man with vision, could keep going with ever-increasing strength? In 1929, Pope Pius XI named him the patron of parish priests worldwide.

THE CHAPLET OF THE SEVEN SORROWS OF MARY

PRAYER TO OUR LADY OF THE MIRACLE