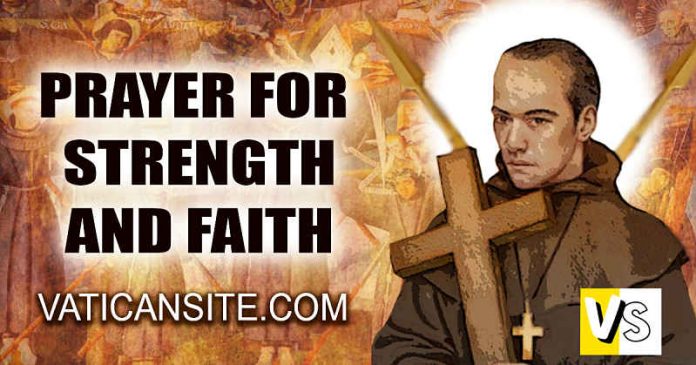 I pray, Dear Lord, source of strength for all your saints, you led Paul Miki and his companions through the suffering of the cross to the joy of eternal life
see me through these hard times.I n these troubling times, I am filled with unspeakable fears
I am filled with unspeakable fears. I reach out my hand to you now, And ask you to walk besides me. I cannot carry all my burdens, But I know you can, and will. Please walk beside me. Please guide me. Please help me hold on strong, Through the trials and storms. Help me hold on to my faith, In even the darkest hour. Stay with me Lord, And show me Your way. In your love and Holy Spirit I abide. Amen.

Although Francis moved on and eventually died near the shores of China, the faith had grown in Japan. By 1587 there were over two hundred thousand Catholics.

Missionaries from various religious orders were there. Japanese priests, religious and lay people lived the faith joyfully. In 1597, forty-five years after the arrival of Francis Xavier, a powerful Japanese official, Hideyoshi, listened to the gossip of a Spanish merchant.

The merchant whispered that the missionaries were traitors of Japan. He suggested that these traitors would cause Japan to be defeated by Spain and Portugal. The claim was false and absurd. But as an overreaction, Hideyoshi had twenty-six people arrested.

The twenty-six were led to the place of execution outside Nagasaki. They were fastened to individual crosses with chains and cords and had iron collars clamped around their necks. Each cross was hoisted and the base was lowered into a hole dug for it. Spears were thrust into each of the victims.

They died almost at the same moment. Their blood-stained clothes were treasured by the Christian community and miracles happened through their intercession.

Each martyr was a gift to the Church. St. Paul Miki, a Jesuit catechist, had been a great preacher. His last valiant homily came from the cross as he encouraged the Christian community to be faithful until death. It was February 5, 1597. St. Paul Miki and his companions were proclaimed saints by Pope Gregory XVI in 1862.

The 12 incredible promises to those who have a true devotion...