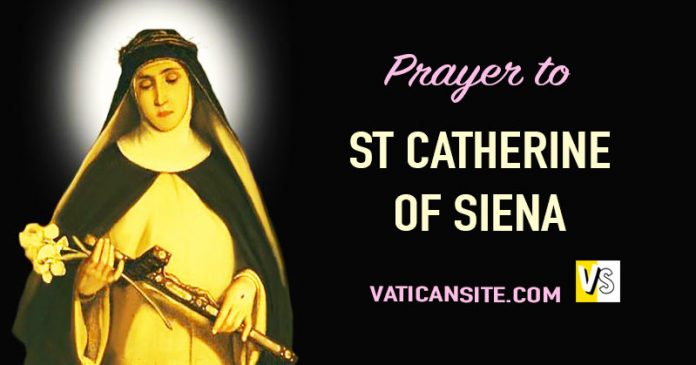 St. Catherine of Siena was a Dominican tertiary who worked to return the papacy from France to Italy. She is one of two patron saints of Italy.

Heavenly Father, your glory is in your saints. We praise your http://vaticansite.com/wp-admin/admin.php?page=sg-cachepressglory in the life of the admirable St. Catherine of Siena, virgin and doctor of the Church.

Her whole life was a noble sacrifice inspired by an ardent love of Jesus, your unblemished Lamb.

In troubled times she strenuously upheld the rights of His beloved spouse, The Church.

Father, honor her merits and hear her prayers for each of us, and for our whole parish family dedicated to her.

Help us to pass unscathed through the corruption of this world, and to remain unshakably faithful to the church in word, deed, and example.

Help us always to see in the Vicar of Christ an anchor in the storms of life, and a beacon of light to the harbor of your Love, in this dark night of your times and men’s souls.

Grant also to each of us our special petition . . .

(State your own intentions)

We ask this through Jesus, your Son, in the bond of the Holy Spirit.

St. Catherine of Siena, Pray for us.

Caterina Benincasa was born in Siena on March 25th 1347, the last of 25 children of the wealthy wool-dyer Jacopo Benincasa and Lapa di Puccio dé Piacenti.

At the age of six, Catherine received her first vision, near the Church of San Domenico. From this moment onwards the child began to follow a path of devotion, taking the oath of chastity only a year later.

After initial resistance from her family, eventually her father gave in and left Catherine to follow her inclinations. In 1363, at just 15 years of age, Catherine donned the black cloak of the Dominican Tertiary sisters. In 1367 she began working tirelessly to help the sick at the hospital of Santa Maria della Scala.

As her fame spread throughout Christendom, during a visit to the city of Pisa Catherine received the stigmata from a wooden cross hanging in the Church of Santa Cristina.

Her many travels abroad to act as mediator for the Papacy included a trip to Avignon, where she urged Pope Gregory to bring the Papal Court back to Rome from its exile in France.

On returning to Siena, Catherine founded the Monastery of Santa Maria degli Angeli in the castle of Belcaro.

With the death of Pope Gregory XI in 1378, his successor Urban VI had to face strong opposition from a number of cardinals who had elected a second Pope with the name of Clement VII, thereby provoking what would later come to be termed the Great Schism of the West.

Pope Urban VI called on Catherine to act as mediator with princes, politicians and members of the Church, with a view to legitimising his election.

In 1380, at just 33, Catherine died and was buried in the Rome church of Santa Maria Sopra Minerva.

In 1461 Pope Pius II proclaimed her saint and in 1866 Pius IX included her as one of the patron saints of Rome. In 1939, along with St Francis of Assisi, St Catherine of Siena was proclaimed patron saint of Italy by Pope Pius XII.

In 1970 Paul VI conferred the title of Doctor of the Universal Church on Catherine and in 1999 she was proclaimed co-patron saint of Europe by Pope John Paul II.

PRAYER TO THE SAINT OF THE IMPOSSIBLE