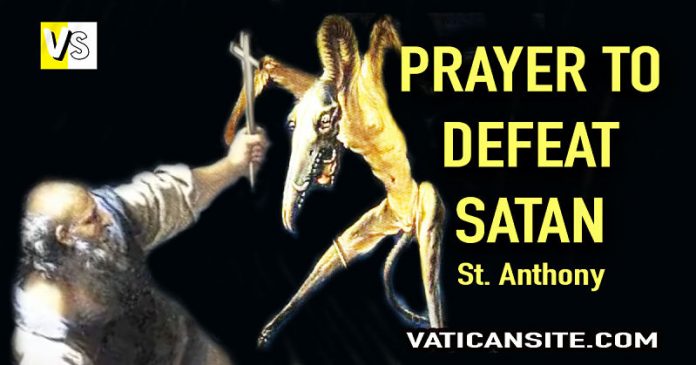 Dear God, St. Anthony the Abbot accepted your call to renounce the world and to love you above all things. He faithfully served you in the solitude of the desert by fasting, prayer, humility and good works. In the Sign of The Cross, he triumphed over the Devil.

Through his intercession, may we learn to love you better; with all our hearts, all our souls, all our minds, all our strength and to love our neighbours as we love ourselves.

St. Anthony the Abbot, great and powerful saint, grant us also this special request […]. We ask this through our lord Jesus Christ, who lives and reigns with God the Father and the Holy Spirit. One God forever and ever, Amen.

O Divine Eternal Father, in union with your Divine Son and the Holy Spirit, and through the Immaculate Heart of Mary, I beg You to destroy the Power of your greatest enemy — the evil spirits.

Cast them into the deepest recesses of hell and chain them there forever! Take possession of Your Kingdom which You have created and which is rightfully Yours.

Heavenly Father, give us the reign of the Sacred Heart of Jesus and the Immaculate Heart of Mary.

Following the death of his parents when he was about 20, Anthony insured that his sister completed her education, then he sold his house, furniture, and the land he owned, gave the proceeds to the poor, joined the anchorites who lived nearby, and moved into an empty sepulchre.

At age 35 he moved to the desert to live alone; he lived 20 years in an abandoned fort.

Anthony barricaded the place for solitude, but admirers and would-be students broke in. He miraculously healed people, and agreed to be the spiritual counselor of others. His recommendation was to base life on the Gospel.

Word spread, and so many disciples arrived that Anthony founded two monasteries on the Nile, one at Pispir, one at Arsinoe. Many of those who lived near him supported themselves by making baskets and brushes, and from that came his patronage of those trades.

Anthony briefly left his seclusion in 311, going to Alexandria, Egypt to fight Arianism, and to comfort the victims of the persecutions of Maximinus. At some point in his life, he met with his sister again. She, too, had withdrawn from the world, and directed a community of nuns. Anthony retired to the desert, living in a cave on Mount Colzim.

Descriptions paint him as uniformly modest and courteous. His example led many to take up the monastic life, and to follow his way. Late in life Anthony became a close friend of Saint Paul the Hermit, and he buried the aged anchorite, leading to his patronage of gravediggers. His biography was written by his friend Saint Athanasius of Alexandria.

His relationship with pigs and patronage of swineherds is a little complicated. Skin diseases were sometimes treated with applications of pork fat, which reduced inflammation and itching.

As Anthony’s intervention aided in the same conditions, he was shown in art accompanied by a pig. People who saw the art work, but did not have it explained, thought there was a direct connection between Anthony and pigs – and people who worked with swine took him as their patron.

DAY 3-THREE DAYS OF PRAYER TO OUR LADY OF CANDLES