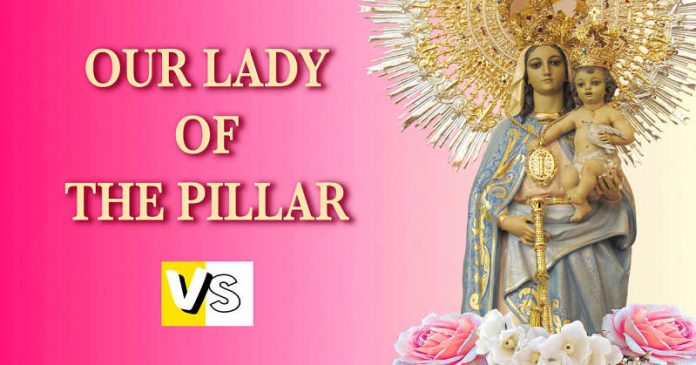 Most Holy Virgin of Pilar,
to thy care we confide the needs of our families,
the joys of children,
the dreams of youth,
the anxieties of adults,
the sufferings of the sick,
and our preparation for life’s end.

To Thee we entrust the perseverance
of our priests and religious.

Ever increase our Faith,
give assurance to our Hope
and enliven our Charity.
Amen.

OUR LADY OF PILLAR

The origin of the Our Lady of Pilar shrine to the year 40 A.D., when St. James the Apostle was sitting here on the bank of the Ebro River, discouraged and heartsick at his lack of success in bringing Christianity to the region.  The Virgin Mary appeared to him and reassured him that his efforts would not be in vain.  She also asked him to consecrate a church in her name, and left behind a pillar of jasper to mark the spot where she had made her appearance.
As Mary promised, St. James was indeed successful in bringing Christianity to Spain, and the place of his encounter with the Virgin became a holy place.  Through the centuries—including years when Zaragoza was under Muslim control, when it suffered from plague and famine, and through years of civil war and unrest—this site has continued to draw the faithful.  Holy men and women such as St. John of the Cross, St. Teresa of Avila, and St. Ignatius of Loyola have all made the journey here to show their devotion to Our Lady of Pilar, who is the patroness of Spain.
The most prominent miracle associated with the shrine happened in the seventeenth century to a poor beggar named Miguel Juan Pellicer from the town of Calanda.  Unable to work because of an amputated leg, he had a great devotion to the shrine and frequently prayed there for help.  The Virgin Mary answered his prayers by restoring his missing leg, and after word spread of the miracle, the number of pilgrims to the church greatly increased.

Prayer to Our Lady of Prompt Succor