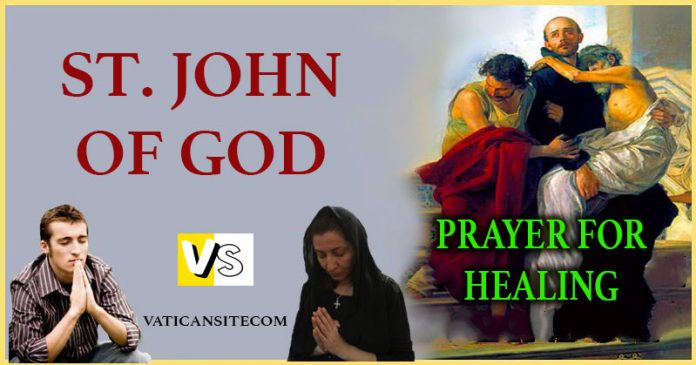 PRAYER FOR HEALING TO ST. JOHN OF GOD

Saint John of God, I honor thee as the Patron of the Sick, especially of those who are afflicted by heart disease. I choose thee to be my patron and protector in my present illness. To thee I entrust my soul, my body, all my spiritual and temporal interests, as well as those of the sick throughout the world. To thee I consecrate my mind, that in all things it may be enlightened by faith above all in accepting my cross as a blessing from God; my heart, that thou doth keep it pure and fill it with the love for Jesus and Mary that burned in thy heart; my will, that like thine, it may always be one with the Will of God.

Good Saint John, I honor thee as the model of penitents, for thou didst receive the grace to give up a sinful life and to atone for thy sins by untiring labors in behalf of the poor and sick. Obtain for me the grace from God to be truly sorry for my sins, to make atonement for them and never again offend God. Aid me in mastering my evil inclinations and temptations, and in avoiding all occasions of sin. Through thine intercession may I obtain the grace from Jesus and Mary to fulfill faithfully all the duties of my state of life and to practice those virtues which are needful for my salvation. Help me to belong to God and Our Lady in life and in death through perfect love. May my life, like thine, be spent in the untiring service of God and my neighbor.

Since Holy Mother Church also invokes thee in her prayers for the dying, I beg thee to be with me in my last hour and pray for me. As thou didst die kneeling before a crucifix, may I find strength, consolation and salvation in the Cross of my Redeemer, and through His tender mercy and the prayers of Our Lady, and through thine intercession, attain to eternal life.
Amen.

As a Spanish soldier, John gave up religion and led a wild life. After he left the military at age forty, he returned to shepherding on the mountains. This left him time to think about his past life. Believing that he was a terrible sinner, John decided to make a drastic change. He vowed to go to Moslem North Africa and free Christian slaves. With the help of his confessor he decided instead to open a religious bookstore in Granada:

Once John was traveling home after a day of work, when he saw a child whose feet were bleeding because he had no shoes. John picked up the child and carried him to the next town. All the while, his burden was getting heavier and heavier, until he was forced to put the boy down and rest. Suddenly the child changed and appeared as the Christ Child, Who held up to him half a pomegranate saying, “John of God, you will find your cross in Granada.” The Spanish word granada means “pomegranate.”

John heard John of Avila preach and felt he still must do something to show his sorrow for sins. He began publicly beating himself; he ran through the streets, tearing his hair, and behaved so excitedly that people threw stones at him to drive him away. This man, who felt his need for God so deeply, was put into a mental institution.

When John of Avila heard of the effect his sermon had on John, he went to the hospital and calmed John, persuading him to use his energy caring for the sick and poor. John left the hospital and rented a house near Granada. Out into the streets he went to find the poor and uncared for. What a hospital he had! The lepers, the lame, the insane, the paralyzed, the deaf-all found shelter there.

In the beginning John went begging for money to support these poor, but soon people came to give him alms, food, and supplies because they were so impressed with his charity. Once when a fire broke out in the house, John ran back into the burning building countless times, carrying the sick out on his back.

Unemployed men came to the door, and he found them work. When the archbishop called John to his office because people complained that John kept tramps and immoral women in his hospital, he was silenced by John’s humility. John fell on his knees, saying, “I know of no bad person in my hospital except myself, who am unworthy to eat the bread of the poor.” Another bishop who invited John to supper was so impressed by his humility that he called him John of God.

John attracted many helpers. After his death, these formed a religious community called the Brothers Hospitallers.

John died of a disease he contracted while saving a drowning man; his illness was made worse because he had exhuasted himself. When he realized he was dying, John went over all the hospital accounts, revised the rules and schedules of his staff, and appointed a leader to take his place. He died kneeling before the altar in his hospital chapel.

PRAYER TO ASSUMPTION OF MARY