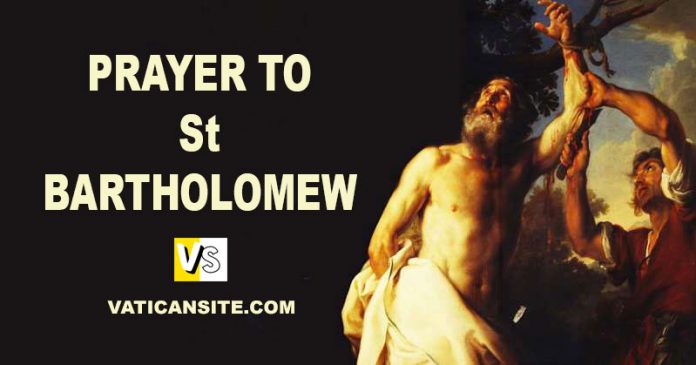 God and loving father, you have given us the glorious Apostle Bartholomew as our beloved Patron Saint and powerful advocate in heaven.

We offer you our prayers, animated by a spirit of confidence that through the efficacious intercession of Saint Bartholomew, we shall merit your unfailing help and protection and shall ever remain loyal and devoted to Divine will all the days of our life.

Teach us to cherish, proclaim, and practice the Gospel message of Christ, which Saint Bartholomew so eloquently preached and finally sealed with his heroic martyrdom.

As we prepare devoutly for his solemn feast by this novena of prayers, we trustingly raise our minds and hearts to you.

Refuse not, o Lord God, our humble petition but unite it with that of Apostle Bartholomew and of the Blessed Virgin Mary, Queen of the Apostles, so that we may obtain the grace of true repentance for our Sins, of divine assistance in our spiritual and temporal wants, and of constant fidelity to all our Christian duties. This we ask through Jesus Christ, Our Lord,

In the New Testament, Bartholomew is mentioned only in the lists of the apostles. Some scholars identify him with Nathanael, a man of Cana in Galilee who was summoned to Jesus by Philip. Jesus paid him a great compliment: “Here is a true Israelite.

Whatever amazing revelation this involved, it brought Nathanael to exclaim, “Rabbi, you are the Son of God; you are the King of Israel” (John 1:49b). But Jesus countered with, “Do you believe because I told you that I saw you under the fig tree? You will see greater things than this” (John 1:50b).

Nathanael did see greater things. He was one of those to whom Jesus appeared on the shore of the Sea of Tiberias after his resurrection (see John 21:1-14). They had been fishing all night without success.

In the morning, they saw someone standing on the shore though no one knew it was Jesus. He told them to cast their net again, and they made so great a catch that they could not haul the net in. Then John cried out to Peter, “It is the Lord.”

When they brought the boat to shore, they found a fire burning, with some fish laid on it and some bread. Jesus asked them to bring some of the fish they had caught, and invited them to come and eat their meal.

John relates that although they knew it was Jesus, none of the apostles presumed to inquire who he was. This, John notes, was the third time Jesus appeared to the apostles.

Nothing is known for sure about the life of Nathaniel/Bartholomew after the Ascension of Jesus, but tradition holds that he preached in the East and died a martyr’s death in Armenia, being flayed alive for having won converts to the Lord Jesus.

The most powerful prayer of all