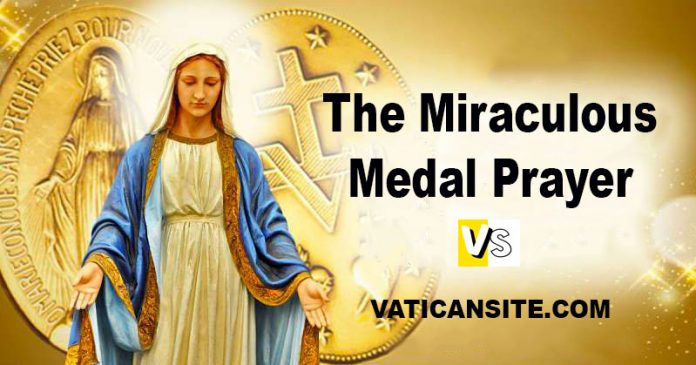 O Virgin Mother of God, Mary Immaculate, We dedicate and consecrate ourselves to you under the title of Our Lady of the Miraculous Medal. May this Medal be for each one of us a sure sign of your affection for us and a constant reminder of our duties toward you. Ever while wearing it, may we be blessed by your loving protection and preserved in the grace of your Son.

O Most Powerful Virgin, Mother of Our Savior, keep us close to you every moment of our lives. Obtain for us, your children, the grace of a happy death; so that in union with you, we may enjoy the bliss of Heaven forever.

The medal is striking because Our Lady herself presented the familiar design.

The front of the medal depicts Mary standing on a globe, with the head of a serpent beneath her feet. Circling the oval-shaped medal is the signature, “O Mary, conceived without sin, pray for us who have recourse to thee.” On the reverse, 12 stars surround a large “M,” from which a cross arises. Below the “M,” the medal depicts two flaming hearts. The left heart, circled with thorns, represents Jesus. The right heart, pierced by a sword, symbolizes Mary.

• Mary stands on a globe, crushing a serpent beneath her feet. Describing the original vision, Catherine said the Blessed Mother appeared radiant as a sunrise, “in all her perfect beauty.”
• Rays shoot out from Mary’s hands, which she told Catherine, “… symbolize the graces I shed upon those who ask for them.”
• Words from the vision form an oval frame around Mary: “O Mary, conceived without sin, pray for us who have recourse to thee.”
Seen as a matrix, the elements of the front design encapsulate major Marian tenets:

Quality of Our Lady As Illustrated by the Medal

• Mother — Her open arms, the “recourse” we have in her.
• Immaculate — The words, “conceived without sin.”
• Assumed into Heaven — She stands on the globe.
• Mediatrix — Rays from her hands symbolizing “graces.”
• Our Protection — Crushes the serpent (Gn 3:15).

• A cross-and-bar surmounts a large, bold “M.”
• 12 stars disperse around the perimeter.
• Two hearts are depicted underneath the “M,” the left lapped with a crown of thorns, the right skewed by a sword. From each, a flame emanates from the top. Again, employing a grid analysis, we can see how the reverse-side design contains great symbolism reflecting major tenets of the Catholic faith.

Design Element and its Catholic Meaning

• The large letter “M” — Mary as Mother, Mediatrix.
• Cross and bar — Jesus’ Cross of Redemption.
• 12 stars — 12 Apostles, who formed the first Church.
• Left Heart — The Sacred Heart, who died for our sins.
• Right Heart — The Immaculate Heart, who intercedes for us.
• Flames — The burning love Jesus and Mary have for us.

PRAYER TO THE VIRGIN MOST POWERFUL

THREE DAYS OF PRAYER TO OUR LADY OF FATIMA