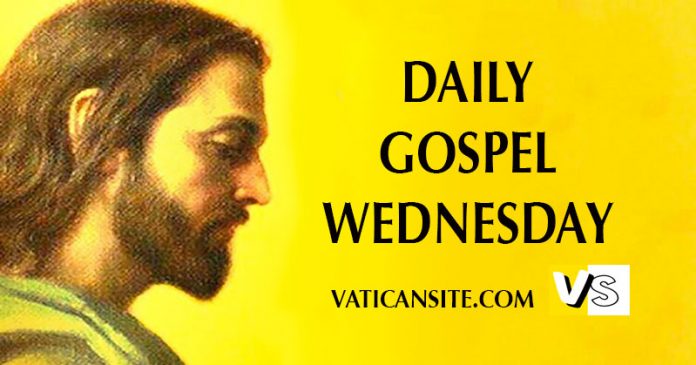 Wednesday of the Eighteenth week in Ordinary Time

The LORD said to Moses [in the desert of Paran,]

“Send men to reconnoiter the land of Canaan, which I am giving to the Israelites. You shall send one man from each ancestral tribe, all of them princes.”

After reconnoitering the land for forty days they returned, met Moses and Aaron and the whole community of the Israelites in the desert of Paran at Kadesh, made a report to them all, and showed them the fruit of the country.

They told Moses: “We went into the land to which you sent us. It does indeed flow with milk and honey, and here is its fruit.

However, the people who are living in the land are fierce, and the towns are fortified and very strong. Besides, we saw descendants of the Anakim there.

Amalekites live in the region of the Negeb; Hittites, Jebusites and Amorites dwell in the highlands, and Canaanites along the seacoast and the banks of the Jordan.”

Caleb, however, to quiet the people toward Moses, said, “We ought to go up and seize the land, for we can certainly do so.”

But the men who had gone up with him said, “We cannot attack these people; they are too strong for us.”

So they spread discouraging reports among the Israelites about the land they had scouted, saying, “The land that we explored is a country that consumes its inhabitants. And all the people we saw there are huge men, veritable giants (the Anakim were a race of giants); we felt like mere grasshoppers, and so we must have seemed to them.”

At this, the whole community broke out with loud cries, and even in the night the people wailed.

The LORD also said to Moses and Aaron:

“How long will this wicked community grumble against me? I have heard the grumblings of the Israelites against me.

Tell them: By my life, says the LORD, I will do to you just what I have heard you say.

Here in the desert shall your dead bodies fall. Of all your men of twenty years or more, registered in the census, who grumbled against me, Forty days you spent in scouting the land; forty years shall you suffer for your crimes: one year for each day. Thus you will realize what it means to oppose me.

I, the LORD, have sworn to do this to all this wicked community that conspired against me: here in the desert they shall die to the last man.”

We have sinned, we and our fathers;
we have committed crimes; we have done wrong.
Our fathers in Egypt
considered not your wonders.

But soon they forgot his works;
they waited not for his counsel.
They gave way to craving in the desert
and tempted God in the wilderness.

Then he spoke of exterminating them,
but Moses, his chosen one,
withstood him in the breach
to turn back his destructive wrath.

Holy Gospel of Jesus Christ according to Saint Matthew 15:21-28.

At that time Jesus withdrew to the region of Tyre and Sidon.

And behold, a Canaanite woman of that district came and called out, “Have pity on me, Lord, Son of David! My daughter is tormented by a demon.”

But he did not say a word in answer to her. His disciples came and asked him, “Send her away, for she keeps calling out after us.”

He said in reply, “I was sent only to the lost sheep of the house of Israel.”

But the woman came and did him homage, saying, “Lord, help me.”

He said in reply, “It is not right to take the food of the children and throw it to the dogs.”

She said, “Please, Lord, for even the dogs eat the scraps that fall from the table of their masters.”

Then Jesus said to her in reply, “O woman, great is your faith! Let it be done for you as you wish.” And her daughter was healed from that hour.

Gospel according to Saint Luke 5:17-26 CATHOLIC