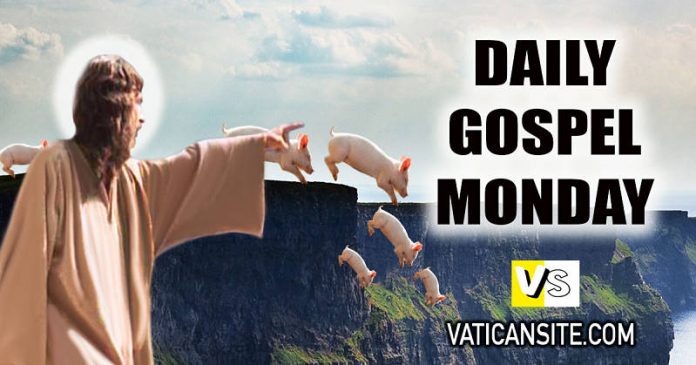 Monday of the Fourth week in Ordinary Time

What more shall I say? I have not time to tell of Gideon, Barak, Samson, Jephthah, of David and Samuel and the prophets, who by faith conquered kingdoms, did what was righteous, obtained the promises; they closed the mouths of lions, put out raging fires, escaped the devouring sword; out of weakness they were made powerful, became strong in battle, and turned back foreign invaders.

Women received back their dead through resurrection. Some were tortured and would not accept deliverance, in order to obtain a better resurrection.

Others endured mockery, scourging, even chains and imprisonment.

They were stoned, sawed in two, put to death at sword’s point; they went about in skins of sheep or goats, needy, afflicted, tormented.

The world was not worthy of them. They wandered about in deserts and on mountains, in caves and in crevices in the earth.

Yet all these, though approved because of their faith, did not receive what had been promised.

God had foreseen something better for us, so that without us they should not be made perfect.

How great is the goodness, O LORD,
which you have in store for those who fear you,
And which, toward those who take refuge in you,
you show in the sight of the children of men.

You hide them in the shelter of your presence
from the plottings of men;
You screen them within your abode
from the strife of tongues.

Blessed be the LORD whose wondrous mercy
he has shown me in a fortified city.

Once I said in my anguish,
“I am cut off from your sight”;
Yet you heard the sound of my pleading
when I cried out to you.

Love the LORD, all you his faithful ones!
The LORD keeps those who are constant,
but more than requites those who act proudly.

Holy Gospel of Jesus Christ according to Saint Mark 5:1-20.

Jesus and his disciples came to the other side of the sea, to the territory of the Gerasenes.

When he got out of the boat, at once a man from the tombs who had an unclean spirit met him.

The man had been dwelling among the tombs, and no one could restrain him any longer, even with a chain.

In fact, he had frequently been bound with shackles and chains, but the chains had been pulled apart by him and the shackles smashed, and no one was strong enough to subdue him.

Night and day among the tombs and on the hillsides he was always crying out and bruising himself with stones.

Catching sight of Jesus from a distance, he ran up and prostrated himself before him, crying out in a loud voice, “What have you to do with me, Jesus, Son of the Most High God? I adjure you by God, do not torment me!”

(He had been saying to him, “Unclean spirit, come out of the man!”)

He asked him, “What is your name?” He replied, “Legion is my name. There are many of us.”

And he pleaded earnestly with him not to drive them away from that territory.

Now a large herd of swine was feeding there on the hillside.

And they pleaded with him, “Send us into the swine. Let us enter them.”

And he let them, and the unclean spirits came out and entered the swine. The herd of about two thousand rushed down a steep bank into the sea, where they were drowned.

The swineherds ran away and reported the incident in the town and throughout the countryside. And people came out to see what had happened.

As they approached Jesus, they caught sight of the man who had been possessed by Legion, sitting there clothed and in his right mind. And they were seized with fear.

Those who witnessed the incident explained to them what had happened to the possessed man and to the swine.
Then they began to beg him to leave their district.

As he was getting into the boat, the man who had been possessed pleaded to remain with him.

But he would not permit him but told him instead, “Go home to your family and announce to them all that the Lord in his pity has done for you.”

Then the man went off and began to proclaim in the Decapolis what Jesus had done for him; and all were amazed.