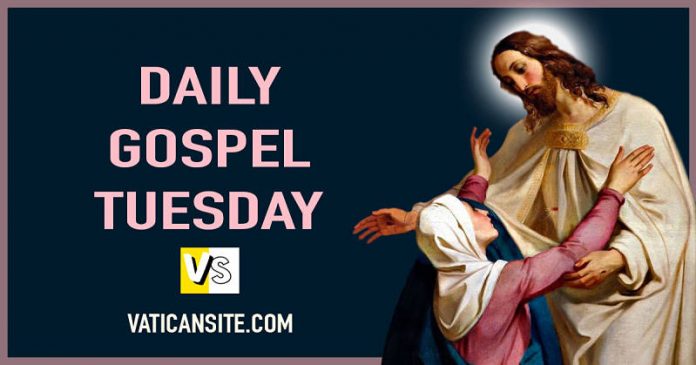 Tuesday of the Third week in Ordinary Time

When it was reported to King David that the LORD had blessed the family of Obed-edom and all that belonged to him, David went to bring up the ark of God from the house of Obed-edom into the City of David amid festivities.

As soon as the bearers of the ark of the LORD had advanced six steps, he sacrificed an ox and a fatling.

Then David, girt with a linen apron, came dancing before the LORD with abandon,
as he and all the Israelites were bringing up the ark of the LORD with shouts of joy and to the sound of the horn.

The ark of the LORD was brought in and set in its place within the tent David had pitched for it. Then David offered holocausts and peace offerings before the LORD.

When he finished making these offerings, he blessed the people in the name of the LORD of hosts.

He then distributed among all the people, to each man and each woman in the entire multitude of Israel, a loaf of bread, a cut of roast meat, and a raisin cake. With this, all the people left for their homes.

Lift up, O gates, your lintels;
reach up, you ancient portals,
that the king of glory may come in!

Who is this king of glory?
The LORD, strong and mighty,
the LORD, mighty in battle.

Lift up, O gates, your lintels;
reach up, you ancient portals,
that the king of glory may come in!

Holy Gospel of Jesus Christ according to Saint Mark 3:31-35.

The mother of Jesus and his brothers arrived at the house. Standing outside, they sent word to Jesus and called him.

But he said to them in reply, “Who are my mother and (my) brothers?”

And looking around at those seated in the circle he said, “Here are my mother and my brothers.

(For) whoever does the will of God is my brother and sister and mother.”

Gospel according to Saint Mark 2:1-12. CATHOLIC