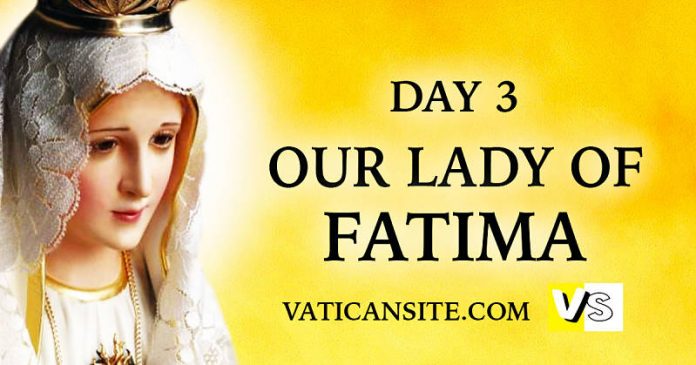 The story of Fatima begins with three humble shepherd children. Lucia, Francisco, and Jacinta lived quiet lives. They tended their sheep and enjoyed playing games together. They were ordinary children, who took part in an extraordinary event.

In 1917, in a series of apparitions, Our Blessed Mother appeared to the three shepherd children. On October 13, 1917 about 70,000 people gathered in the pouring rain because Our Blessed Mother promised the children a miracle would take place as a sign of her messages to them. During the apparition, the rain stopped and the clouds parted. The spectators could view the sun without discomfort.

They saw the sun whirl and dance. Prior to the Miracle of the Sun, the spectators were drenched with rain. After the sun became still, they were completely dry.

During each of the apparitions Our Lady told the children of the importance of prayer and penance, especially during troubled times. Her message has often been interpreted in light of the devastating world wars which broke out soon after her appearance.

O Most Holy Virgin Mary, you came to Fatima to reveal the graces that come from praying the Holy Rosary to three little shepherd children.

Inspire us with a sincere love of this devotion so that, like the shepherd children, it is not a burdensome task but a life-giving prayer. May our prayers and meditations on the mysteries of our redemption bring us closer to your Son, Our Lord Jesus Christ.

Our Lady of Fatima, thank you for appearing to the children at Fatima and delivering messages that are still relevant to us today. We pray again and again for peace in the world and for an end to war. May we continue to pray and sacrifice as you requested.

Lord Jesus, the miracles, prophecies and prayers that Your Mother brought to us at Fatima amazed the whole world. We are certain of her closeness to You. We ask through the intercession of Our Lady of Fatima that you graciously hear and answer our prayers.

“From sins against the life of man from its very beginning, deliver us.”