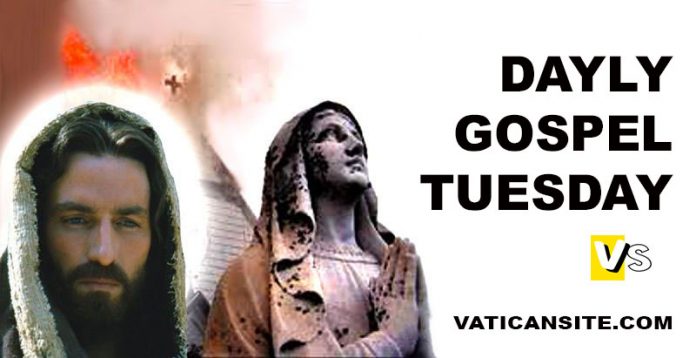 Tuesday of the Thirty-fourth week in Ordinary Time

Daniel said to Nebuchadnezzar: “In your vision, O king, you saw a statue, very large and exceedingly bright, terrifying in appearance as it stood before you.

The head of the statue was pure gold, its chest and arms were silver, its belly and thighs bronze, the legs iron, its feet partly iron and partly tile.

While you looked at the statue, a stone which was hewn from a mountain without a hand being put to it, struck its iron and tile feet, breaking them in pieces.

The iron, tile, bronze, silver, and gold all crumbled at once, fine as the chaff on the threshing floor in summer, and the wind blew them away without leaving a trace. But the stone that struck the statue became a great mountain and filled the whole earth.

“This was the dream; the interpretation we shall also give in the king’s presence.

You, O king, are the king of kings; to you the God of heaven has given dominion and strength, power and glory; men, wild beasts, and birds of the air, wherever they may dwell, he has handed over to you, making you ruler over them all; you are the head of gold.

Another kingdom shall take your place, inferior to yours, then a third kingdom, of bronze, which shall rule over the whole earth.

There shall be a fourth kingdom, strong as iron; it shall break in pieces and subdue all these others, just as iron breaks in pieces and crushes everything else.

The feet and toes you saw, partly of potter’s tile and partly of iron, mean that it shall be a divided kingdom, but yet have some of the hardness of iron. As you saw the iron mixed with clay tile, and the toes partly iron and partly tile, the kingdom shall be partly strong and partly fragile.

The iron mixed with clay tile means that they shall seal their alliances by intermarriage, but they shall not stay united, any more than iron mixes with clay.

In the lifetime of those kings the God of heaven will set up a kingdom that shall never be destroyed or delivered up to another people; rather, it shall break in pieces all these kingdoms and put an end to them, and it shall stand forever.

That is the meaning of the stone you saw hewn from the mountain without a hand being put to it, which broke in pieces the tile, iron, bronze, silver, and gold. The great God has revealed to the king what shall be in the future; this is exactly what you dreamed, and its meaning is sure.”

All you hosts of the Lord, bless the Lord;
praise and exalt him above all forever.

Holy Gospel of Jesus Christ according to Saint Luke 21:5-11.

While some people were speaking about how the temple was adorned with costly stones and votive offerings, Jesus said, “All that you see here–the days will come when there will not be left a stone upon another stone that will not be thrown down.”

Then they asked him, “Teacher, when will this happen? And what sign will there be when all these things are about to happen?”

He answered, “See that you not be deceived, for many will come in my name, saying, ‘I am he,’ and ‘The time has come.’ Do not follow them!

When you hear of wars and insurrections, do not be terrified; for such things must happen first, but it will not immediately be the end.”

Then he said to them, “Nation will rise against nation, and kingdom against kingdom.
There will be powerful earthquakes, famines, and plagues from place to place; and awesome sights and mighty signs will come from the sky.”